Creators
Carroll Herman Little, Correspondent
Candace Little
, Recipient
Media Type
Text
Item Type
Correspondence
Description
Handwritten letter from Carroll Herman Little to his mother on February 10, 1924. Little discusses family life with wife Bonnie and their children; his work as a Lutheran pastor and faculty member at the Evangelical Lutheran Seminary of Canada in Waterloo, Ontario; the weather; the opening ceremony of the addition to the Seminary building; and meetings with the University of Western Ontario.
Notes
Carroll Herman Little (1872-1958) was a Lutheran pastor, and a professor and administrator at the Evangelical Lutheran Seminary of Canada (later Waterloo Lutheran Seminary; now Martin Luther University College) in Waterloo, Ontario.

It is now 7:30 p.m. I have just got in from shoveling snow off the sidewalks – a whole hour’s job after supper. We had another big snow-storm last night and to-day and very heavy wind which sent the snow drifting in every direction. On a long stretch between my place and Rumball’s the drift was four or five feet deep. I put a cut 3 or 4 ft. wide through it, but the wind is so strong that I will probably have to repeat the process to-morrow morning. We have had an enormous amount of snow this winter – more I think than any winter since 1917-18 – and more keeps coming every few days. We have had it fairly cold this last week but not disagreeably so. It has ranged generally around 10 to 15° above zero, which is quite comfortable. I usually shovel in my shirt-sleeves and bare headed because it is very warm work. But it was so windy to-night that I put on my palm-beach coat for protection and after shoveling 10 or 15 minutes bare headed I found too much snow was blowing into my thin locks and put a skull cap on for the rest of the job. I don’t know how it is, but this winter it doesn’t make me nearly as tired

to shovel as it did other winters and I rather enjoy the exercise and the fresh breezes. Last Friday night we pulled off our informal opening of the new Seminary annex. We had a good crowd on and gave them a very entertaining evening, which they seemed to enjoy. We took up a collection which amounted to $60.16 giving us a clear gain, after paying all expenses, of over $40.00. I am enclosing you the account of the affair as it appeared in yesterday’s Daily Record. Dr. Hoffmann and Prof. Willison and Mr. Bitzer were in London, Ont. Thursday to confer with the Senate of Western University on the matter of affiliation of our Institution with that University. They reported that the prospects were quite favourable and if the matter is passed upon favourably by our Board of Governors we may be in affiliation by next fall. The advantage for us would be that we could give our boys degrees when they finish the course. Here in Canada only the Universities have the power of granting degrees. Dr. Maurer has just got back from attending the meeting of Presidents at Harrisburg, Pa. He visited the Seminary in Phil’a and secured a man for the important vacancy at Montreal but did not succeed in getting a pastor for Morrisburg. They are offering $1800 and parsonage at the latter place for an experienced man. Tell Herbert if he is tired of business that this would be a good opening for him. He would also be in line for a professorship at Waterloo College in the course of a few years if he were up here somewhere handy. I throw out this suggestion, because apparently his chances for re-instatement at Lenoir-Rhyme are rather slim. If this appeals to him tell him to write me. They would call any man I would recommend at Morrisburg. The only trouble is I have no one to suggest. I am still thinking of supplying the

parish through the summer months if they have no pastor by that time, though I have taken no steps in that direction as yet. I would like to see them get a good pastor there. The children are all from Eileen up going regularly to school and seem to be enjoying the snow and the ice and the winter sports. Little Ruth doesn’t get out a great deal, but has a good time in the house and is a good hand at playing with and taking care of Catharine. The latter is growing, getting livelier every day, tried hard to talk in which she rivals Toots and Caspar’s “Buttercup”. Her hair which used to be dark is now almost flaxen in it whiteness. She is fat and plump and the most perfectly healthy baby we ever had. Bonnie thinks there never was so sweet a baby and that no body else’s would begin to compare with Catharine. This is saying a good deal for Bonnie isn’t overly fond of children and thinks we have already had too many. I must tell you a joke, but don’t give me away. The other night just after a certain crisis had passed, Bonnie said: “My! but wasn’t that good? It’s no wonder we have so many children!” Well, I must close. With love to you all and all good wishes, 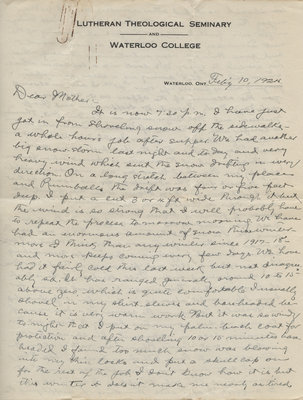