Your most welcome letter of the 24th inst. was received some days ago and was, as you letters always are, much enjoyed. I was shocked, however, by the clipping enclosed giving an account of cousin [B?] Dove’s death. It made me very sad and I could hardly shake off the thought of it. My sincere sympathies go out to cousin [C?] and her family. I see Mr. Dove was 54 years of age, just about two years older than I am. I had an idea that he was somewhat younger than I. I see he was Secretary of State at the time of his death. He was running his campaign when I was down in N.C. the other summer and Aunt Cam mentioned that he had as an opponent a returned soldier and that his election was doubtful, but he must have made it. I was also quite sorry to hear of Aunt Sabina’s serious illness. I suppose by this time she is either buried or on the way to recovery, trust it may be the latter. I thought she looked quite well for her years, when I was down at their home the other summer. Uncle [C?], who must be some years older than she, was looking particularly hale and hearty. I always thought he had such a good-natured look about him – which was rather surprising in a teacher of the common public schools. I accept the Ante Nicene Fathers, with thanks on the conditions stated and don’t think I will have much trouble in retaining them. I

expect to have 3 or 4 ministers among the boys of my family. I think all of them are inclined that way so far, and I shall do all in my power to help and encourage them to retain the institution. As so many boys in the College have the ministry in view this will also materially aid, as it will make it easy for them to go with the tide. I was down at St. John’s this morning. Pastor Roberts was just getting over a cold and was not feeling very well and asked me to take the Liturgy for him, which I did. I had not read it in the German for a long time, but got through with it all right. Prof. Schorten who was present told me I did fine. I am enclosing the last section of Mr. Jannau’s “Mad Years” and also a sermonette, which I did not preach, but prepared for the January number of the Canada Lutheran. I‘m not enclosing it because I am proud of it, but just thought you might be interested. Last Friday night we held another meeting of the Constitution Committee appointed by the Merger Committee of the two Synods and agreed on a constitution which we will present to the latter Committee at its next meeting which will be held sometime this month. I am glad to have that off my hands, as I am so busy with my teaching and study that I really have no time to devote to outside jobs. This week is going to be broken up too – by a skating party of the College and Seminary on Tuesday night and by our informal opening of Friday night at which latter Dr. Hoffmann, Prof. Willison and myself are supposed to make addresses. What I shall say I have no idea at this date. This afternoon the boys and I were over at the Seminary rink for a skate. The ice was fine and the weather mild – about 20° above zero – so that one could skate with comfort without an overcoat on. I enjoy it, but I get more tired that I used to – which, I take it, is a sign of increasing age. Bonnie complains a great deal of being

tired and I am sure she works too hard; but she won’t let up and to hire anybody is altogether out of the question. So I don’t know how to help her in the matter. I got my cheque on Friday and paid up my bills and had a few dollars left over, but by the end of the month I will probably be as hard up as ever. It is very difficult to keep things going on $2000 a year in a family of our size. If I could only get some preaching to do now and then it would help out. Robert and I had a play at chess a while ago. It is generally ‘nip and tuck’ between us with a little advantage on his side, but to-night I became champion, taking two games out of three. Robert was promoted to the first class in his room in school last week. Eileen has a lot of friends in school – always boys and she has great times playing with them. Sometimes they come up to see her and at other times she goes to see them. The ground hog came out yesterday and as he didn’t see his shadow he presumably stayed out. So if he is any sign the worst of our winter should be over. Herman is taking Confirmation Class this year and is getting along very nicely with it and his school work. I have 4 of the children memorizing scripture passages and reciting them every Sunday morning. They generally have it ready before breakfast Sunday morning. Well, I have already gone beyond my usual limit and will close. With love to you one and all, I am 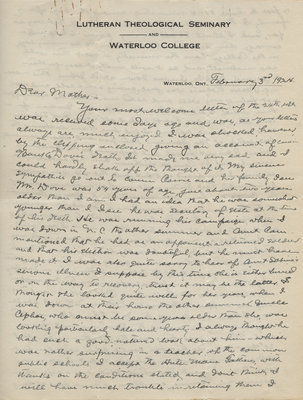