Creators
Carroll Herman Little, Correspondent
Candace Little
, Recipient
Media Type
Text
Item Type
Correspondence
Description
Handwritten letter from Carroll Herman Little to his mother on January 20, 1924. Little discusses family life with wife Bonnie and their children; his work as a Lutheran pastor and faculty member at the Evangelical Lutheran Seminary of Canada in Waterloo, Ontario; the weather; construction of the addition to the Seminary building; and communion service at St. John's Lutheran Church.

The time has come around again that I should write to you and I will get on to the job, though I really don’t have much news to write about. We are having a taste of real winter weather again. I don’t know what the thermometer registered this morning, though it was probably 10 or 12° below zero; and I doubt if it reached zero all day to-day. The temperature was marked by high wind which made the cold all the more penetrating, and there is still quite a gale to-night. However I have such a good fire on to-day that it has been as warm all day as summer time inside the house. The children and I were out awhile this afternoon on the Seminary rink, but didn’t skate very long – not because it was too cold but because there was too much snow on the ice for good skating. We had communion in our Church this morning, but although the pastor has been preaching lately against the custom of once-a-year communion there were only about 40 out of 1000 or more that communed. From the confessional turn-out last night there will be only 5 or 6 more to-night at the English communion. The past will find that he can’t change old customs in a day – at least not in an old established congregation like St. John’s. Carolus didn’t want to be among the few and so he stayed after Sunday School for the German service and took communion in the German this morning with me. It was so

cold to-night that only Bonnie and Herman went to Church. They have not got back yet. The children and I spent a good part of the afternoon playing games of various kinds. Robert had been champion in chess nearly all week, but I beat him 2 games out of 3 this afternoon and now I am champion. We didn’t move into the new Seminary building last week as it wasn’t quite ready, but we expect to get into it next week, perhaps this week yet, though we have set the formal opening for the second week in February. The building with the addition makes a very imposing appearance and the interior is well appointed. I am enclosing again some more “Mad Years”. Mr. Jannau is fully convinced of the stupidity of the Germans, which does not render his writings particularly acceptable around here. He claims, however, to write from what came under his personal experience. Herman and his mother have just got back from Church and report that there were only three at English communion to-night. The pastor will have to do considerable preaching I am thinking before he effects a change. He is inclined to preach too long, though this morning he was agreeably short, which was the best that I can say of his sermon. I am not impressed with him as a preacher and still less as a Theologian, though he has his good points and I am inclined to be charitable. I would like to hear from you as soon as possible concerning the books I wrote you about last week. Well, I must close. With love to you all, I am 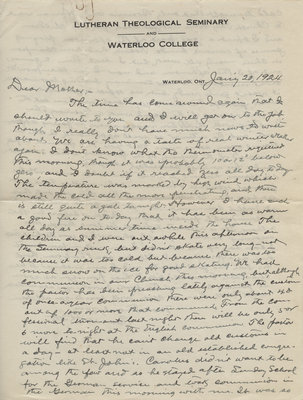