Creators
Carroll Herman Little, Correspondent
Candace Little
, Recipient
Media Type
Text
Item Type
Correspondence
Description
Handwritten letter from Carroll Herman Little to his mother on January 13, 1924. Little discusses family life with wife Bonnie and their children; his work as a Lutheran pastor and faculty member at the Evangelical Lutheran Seminary of Canada in Waterloo, Ontario; the weather; construction of the addition to the Seminary building; and the upcoming merger of the Central Canada and German synods of the United Lutheran Church in America.

Your most welcome and highly interesting letter was received a few days ago and gave us much pleasure. I was especially glad to hear that you had picked up in health and weight since your picture was taken. Your statement in this respect was corroborated by Bikle who wrote me recently that you had gained materially in strength within the last year or so, which was quite gratifying news. Before I go further, lest I forget, I want to make an inquiry of you. Do you still have the set of books entitled “The Ante Nicene Fathers” which were in father’s library? I am in need of them in my Seminary Correspondence course with Chicago. I was under the impression that Dr. Lahr had bought them and I wrote him and he said that he did not have them and had never seen a copy of them except in my father’s library. Since he does not have them I can’t think of anybody else that could have got them and have come to the conclusion that they are still in the library. If they are I would be greatly obliged if you would express them to me. I will pay for the express. If you do not have them maybe you could tell me where they are and between Prof. Zinck and myself we will buy them is they are for sale. Kindly let me know about this matter as soon as you can. In the Seminary and College we expect to move into the new building

this week. It will be a great improvement particularly in the class-rooms, which in the new building are large and roomy. Last week we had a meeting of the Merger Committee of our two Synods. At this meeting the Germans were quite gracious and conciliatory and seemingly anxious for the union. I was appointed on a Committee with Rev. Schmieder and two lay-men to draw up a constitution for the merged synod for submission to the Committee at its next meeting in February. If we don’t run up against some unexpected obstacles the merger promises to go through within the next year or two. To-day, like last Sunday, was snowy. It snowed all day but the snow came down gently and was dry and feathery. I spent a very pleasant day, variety being the spice of life. This morning I was down at Church and heard a very good sermon from Pastor Roberts on the Gospel for the day in which he stressed the duties of parents toward the religious training of their children and also the duties of children after the example of the child Jesus. On practical subjects Pastor Roberts is very good, though I don’t think much of his Theology. This afternoon I read several books of the N.T., then played crokinole with the boys and then went down with Robert and Arthur to the park and skated for about an hour on the lake. Then after supper Robert and I had three games of chess in which I won one. Then we had a little “hand concert” and I put Ruth and Eileen to bed and had Robert to rock Catharine to sleep. The other four children are with their mother at Church to-night. St. John’s held their annual congregational meeting this afternoon, but I didn’t go down and thought I would let them thrash out their own affairs. That was quite a classical Recital Grace Murray gave, and she certainly gave them their money’s worth. I would think that it was rather too long. I am glad Grace and Mrs.

Murray were able to get down and am sure they enjoyed their visit. The picture of the new Gastonia Church resembles Holy Trinity, Hickory so much that I would not have noted from the picture that it was a different Church. I hope though it is not a replica of it as far as the interior arrangement is concerned. That mistake was repeated once too often when St. Andrew’s East End, Hickory was built. The only Church down that way which is of strictly Lutheran construction and arrangement is the little Church at Lincolnton and perhaps the new one at Statesville which was not yet finished when I was down. I do not know Rev. Yost the name sounds Northern. Glad to hear you fared so well with regard to Christmas presents and wish I could have contributed also, but I had my hands more than full with my own at home. Hermine wrote us around Christmas time that she might go down to Hickory through the holidays, but hardly thought she would on account of the cost. I am glad to hear that she is looking as well as I thought she looked rather thin and worn when I saw her last. I am enclosing another installment of Jannau’s articles, which, however, I don’t find quite so interesting. I don’t know whether this winds the series up or not. Bonnie thinks however fine Hermine’s baby may be, it can’t equal ours either in looks, intelligence or good nature any disinterested person being judge. Bonnie was invited down to the Lang’s the other evening to a fashionable tea, but was so out-dressed that she vows she will never go to another. It seems that the women never go to a party to enjoy themselves but to vie with each other as to who can wear the finest clothes. But I must close. With love and all good wishes, I am Most Sincerely yours, 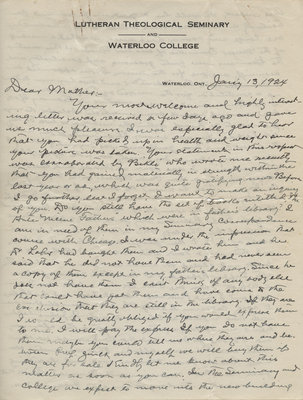