Here I’m off for my first letter to you in the New Year. I’m sure I don’t have much to write about, and I’m afraid it will be a poor beginning, but maybe I will improve as the year advances and there will be a good ending. We all survived the Christmas festivities and don’t seem any the worse for our extra indulgences and are now down to the daily routine of work again. Our College and Seminary opened on Thursday, at least officially, although the attendance was not over 50%. We had our classes and taught all that came, but it was not satisfactory; and I think we will learn by experience not to attempt to open up so late in the week again. We have been having real winter weather since I wrote you last week. Yesterday at noon it was 2° below zero and by night it was down to 8° below. To-day was much colder, though I don’t know what the thermometer registered. There has been an exceedingly heavy wind all day that blew the snow into great drifts. Prof. Henkel drove out to his parish this morning in a cutter and telephoned to his wife this afternoon that he was snow-bound and unable to get back to-day. The wind is still very high and as yet there is no moderation in the cold. At St. John’s they repeated the Christmas concert to-night, but the weather was so rough that I didn’t allow any of the children to go down except Carolus. He just got back a little while ago and reported that it wasn’t fit for anybody to

be out and that the congregation was rather small. I haven’t been outside the house since I came back from Church this morning. It was too comfortable inside to think of budging. I read till I was tired and then we played successively 'chess', 'The Host Heir' and 'crokinole'. Robert is still champion at chess. I am not enclosing the “Six mad years of Bolshevism” this time as the children tore up the paper before I had a chance to cut it out. But they say there was only a short sketch in it this time, so you will not be missing much. It may have been the conclusion of the articles. Instead of Jannau’s articles I am enclosing a letter from Bonnie to Pearl in order to piece out this letter. Carolus’ wounded nose has healed up and is quite as straight and about as good as ever. The biggest damage will consist of the Doctor’s bill. I don’t know what that will be; but it will hardly be less than 5 or more than 10 Dollars. Bonnie thinks we had an extra good dinner to-day: we had sauerkraut and mashed potatoes! On Wednesday evening of this past week we were invited to the Hirtles where we enjoyed an elaborate goose dinner. The only other guests were Principal and Mrs. Willison*. We didn’t do any entertaining ourselves during the holidays, but let it come our way. It was cheaper and entailed less trouble. I had a suit made this last week, though I have neither worn it nor paid for it yet. I was simply obliged to have it as I had got down to the point where the only way I knew I was dressed for Sunday was that on Sunday I put on my cross. The suit I had made is very similar to the black one I wore when down home and the cost is the same. Our new Seminary building is just about finished. We will be able to enter it next week, I think. We had our town election on New Year ’s Day. Bonnie and I both voted, elected our candidate and carried the two by-laws submitted. The one that concerned us most was the Garbage Collection by-law. Well, I must close. With love to all, I am

*This is a mistake: The other guests were Prof & Mrs. Zinck. 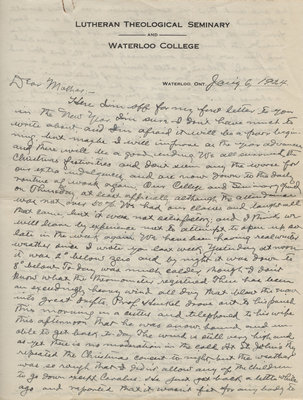