The Christmas season is over and New Year is rapidly approaching and will be on hand by the time you get this letter. May it be a bright, prosperous and happy one to you, the best of mothers, full of rich blessing from the Lord! You know the best present I received this Christmas and the one I treasure and appreciate the most was the splendid picture of yourself by Underwood and Underwood sent from Gastonia by Mabel, but apparently presented by Bikle. I have already written him thanking him for the same and telling him how very much I thought of it. The picture is a perfect work of the photographer’s art, but it is not for this that I appreciate it so highly, but rather because it is the picture of one so dear to my heart. As I said to Bikle, you have aged up some-what since I saw you last but I love every line of your dear old face. Everybody that has seen it thinks it is a wonderful picture and I am proud of it because it is the picture of my mother. Bonnie gave me a fine, large rose-colored, gold band fountain pen as a Christmas present. It is a fine writer and writes as smoothly as an old pen. If people can’t read my writing [?], when once I get used to the pen, it will not be the pen’s fault. I think even now you will be able to read this letter better than some of my past ones. The pen is coarser and the writing is consequently not so fine – in one way, but finer in another. We have had consistent winter weather since I wrote you last week. It is not too cold, but cold enough to snow a little every day. I had intended going out skating this afternoon but it snowed so

much that the ice was not fit. So I didn’t go. I have been down on the lake nearly every day since I wrote you last week. So have all the children with the exception of the three youngest who haven’t learned the art of skating as yet. Carolus met with quite a painful accident last evening. He was playing hockey on the ice in the park when one of the party hoisted the puck which struck him in the face, breaking his nose. He went to the Doctor who set it and bandaged it up. The Dr. said it would come around all right, but at present the boy looks like he has been in an “argument” with Fripo or Dempsey. The younger chaps when they play rough games have to take what they get, and I must say he is not setting up any whine about it. The Dr. said his nose would be straight. Last Wednesday night Bonnie and I, together with Prof. and Mrs. Willison, were invited down to Prof. Zinck’s and enjoyed a big turkey dinner. They had bought a big turkey for Christmas and as there are only two of them, they couldn’t make much headway with it, and we were glad to help them out. I am not doing much studying during the holidays and have been taking more outside exercise, to my physical benefit as I believe. I kept pretty closely at it for the past year. I have just finished the correspondence course for the S. T. M. degree of the Chicago Seminary graduating in nine course, eight of which I completed within the past year. This required the reading and criticism of at least 150 books. At the same time I kept up my work here, read the O.T. through once and the N.T. 14 times during the past year. I have read the N.T. through 86 times since 1914 and expect, if I live, to reach the centennial number by this time next year. Robert wants you to know that he is still champion at chess. Mr. Harmann was up the other night and had a game of chess with me and won out. Then I turned him over to Arthur who licked him in a jiffy. Mr. Harmann who is a big German from Russia was so taken back that he didn’t know what to make of it. By the way, he doesn’t take as unfavourable a view of German rule in the Baltic as Mr. Jannau and thinks the latter writes with considerable prejudice. I am enclosing another installment of Jannau’s history. With love and all good wishes for the New Year, I am, Most Sincerely yours, 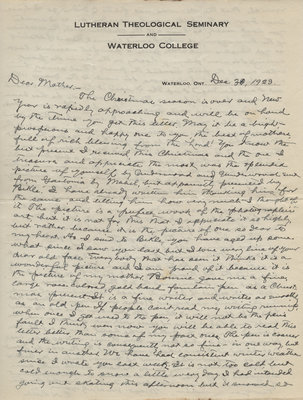