Creators
Carroll Herman Little, Correspondent
Candace Little
, Recipient
Media Type
Text
Item Type
Correspondence
Description
Handwritten letter from Carroll Herman Little to his mother on December 16, 1923. Little discusses family life with wife Bonnie and their children; his work as a Lutheran pastor and faculty member at the Evangelical Lutheran Seminary of Canada in Waterloo, Ontario; construction of the addition to the Seminary building; skating at Waterloo Park; and plans for Christmas.
Notes
Carroll Herman Little (1872-1958) was a Lutheran pastor, and a professor and administrator at the Evangelical Lutheran Seminary of Canada (later Waterloo Lutheran Seminary; now Martin Luther University College) in Waterloo, Ontario.

While Bonnie and most of the children are in Church to-night I will have a little chat with you. The baby is lying in her carriage apparently quite contented. I have just put Eileen and Ruth to bed. Only Arthur is with me. He stayed at home to-night and Robert went to Church in his stead. We just finished three games of chess in which I won two and his is waiting for me to finish this letter so that he can redeem his record. So if I cut this letter short you will know the reason why. I was down at Church this morning. The pastor preached a very good sermon on the Gospel for the day, in which happily there was nothing of an heretical nature. We have had a little colder weather since I wrote you last week. We had a little snow that lasted until to-day when it melted away under the bright sun and the heavy wind. The dam in the park froze over the other night and some of the College boys were down skating on it today, but it was only about an inch thick and hardly safe enough for comfort. To-night the wind is a little more northerly and it may be a little colder by morning, but it is anything else but Christmas weather yet. This week will close our work before the Holidays. It will be mostly examination work as we will have classes only in the forenoons. The College exams have already started. Carolus has had three in which he did pretty well. He made 85 in German and 85 in English Literature, but fell back somewhat in mathematics (Algebra). Marion has finished her examinations in the public school. She did very well, standing fifth in her class. The other children haven’t their reports yet, but I think they

will come out O.K. I will have only one examination at this time, but will have several soon after the school opens in the New Year. The new building is nearly done, but will hardly be ready for occupance before the last of January as it will take some time to get the furniture and put it in place. I am sending you the snap shots Carolus took last Sunday. They didn’t turn out well at all, but they may give you some idea of our interesting family. Catharine, I am instructed to inform you has a tooth and a couple of others so near through that they might just as well be counted. She will accordingly be able to eat cake at Christmas. Bonnie received several Christmas presents last week already. One was a silk undervest from her sister-in-law Mrs. Don DeLong and the other was two little trinkets, for which she can find no earthly use from Clara. However, later she opened her heart and enclosed $1.00 in a letter for candy for the children. Bonnie sent her a pair of stockings, price 1.00, on which she got 10% off. So that she is in 10₵ on the racket. Muriel, Don’s wife, also sent Eileen a little pair of garters from her cousin Monica of about the same age. I haven’t made any preparations yet for Christmas – am waiting for my December cheque, which will likely be along the last of this week. Wagons of Christmas trees were very much in evidence last week, but I didn’t buy any. I find that they get too dry if bought so far ahead and shed their leaves. So I generally get one just a day or two before Christmas. Well, I will have to stop here for this time. My next letter will probably reach you around Christmas day. In the meantime we wish you, one and all, all the joys of the season. With love, I am 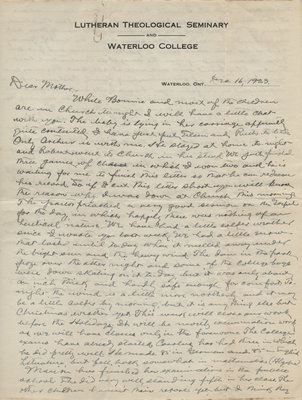