Bonnie has gone down to the Church to a sacred concert given by the Choir to-night. I have just held a “band-concert” with the little ones and put them to bed and played three games of chess with Robert in which more by luck perhaps than by skill I won the two best. And as Hildegard Bendux and Frieda Hamann who came in for the band concert have just left and the house is again reasonably quiet I will try to give you a few lines once more. We had a remarkably warm week last week. It was almost as warm as we had it any time last summer and we not only required no fire, but I wore me palm beach coat with comfort all week. But to-day it turned cool again and I put a fire in the furnace this morning and as to-morrow is the first of October the probability is that I will not need to let it go out again before spring. It would be a great saving though if we could get along without fire next month or the greater part of it yet. We usually have a pretty fine October, though too cold to go without fire. I have only 5 tons of coke in the cellar as yet. I ordered 7 tons of Alberta coal but I suppose it hasn’t arrived yet and it may not come at all as I see the Railway has put up the freight to $12, which is a prohibitive price. In case I can’t get that I may burn coke all winter rather than pay $18 for coal. I think it would be just as cheap and would save a lot of dirty work in the sifting of cinders. If people would refuse to burn coal altogether the outrageous price might come down a notch or two. The coke is also very much too high, but it is not imported and the money paid out for it stays in the country. The only thing about it is that it is rather hard on the grates when it is used alone. I don’t think that it will be my trouble to get fuel this winter, as every-

body that could afford it put in their coal last summer. I just got my cheque from First English Church this morning. I had to borrow the money from Bonnie to pay my insurance premium. But I can pay it back now. I have only about 15₵ in my pocket, but expect to get my cheque to-morrow when I will be all right for a couple weeks more. I find it pretty hard this year with Carolus’ tuition to pay, though I succeeded in getting it reduced to half-fare. With the filling of some of our vacancies and the addition of two more pastors to our staff there will not be much preaching to do during the coming year. I wouldn’t mind that very much, but it will mean a considerable reduction in my income. I think I cleared something like $300 on preaching last year. However, I will have to pull through the best way I can. The Seminary opened last Tuesday with formal exercises at which Dr. Hoffmann and I made addresses. All the Seminary students were present except Mr. Schildroth who was supplying in Nova Scotia and another student who went out to the Canadian west on the harvester excursion. They will both be in this week. The work has started off fine. I have only 14 periods a week and will be able to do much more efficient work this year and also have some time for self-improvement. Work on the new building is going along slowly. There is delay in getting the slate for the roof and they can’t do any plastering until that is on. It looks now as though we will not be able to get into it before the first of January 1924. The College Faculty expelled a boy last week for stealing money out of another student’s pocket. He was a local day student. I suggested the method by which it was ferreted out. The boy confessed and made restitution. Rev. Schorten, the new Modern Languages Professor begins work this week. Carolus will have French and German under him. Up to this time Dr. Potter, who is the most popular professor in the College, has been teaching French. Carolus was getting along so well under him that I regret that a change has to be made. However, I hope Prof. Schorten will also be good. I heard Pastor Roberts again this morning. He is quite a fluent speaker, but his sermons do not measure up by any means to those of Pastor Bockelmann and he is a poor homiletician. But I hope he will get along well with the people. The sacred concert to-night didn’t begin till 8:15 and as it is quite long it will probably be 10 o’clock or past when Bonnie gets back home. She has been busy canning peaches lately. Owing to the frosts taking our to-matoes she will be short about 30 jars this year. Well, I must close. Love to all. 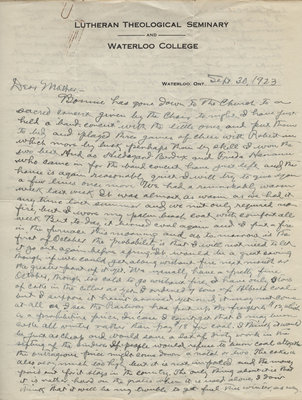