While Bonnie and the older children are in Church to-night I will endeavor to write you a few lines. We had a nice warm week last week, but to-day it became quite cool again, and I think we would have frost to-night if it were not for the high wind and the clouds. However, I hope that this is only a snap and that we will have it mild again for a while longer, particularly as I haven’t any coal in the cellar yet. I ordered 5 T. of coke yesterday but it hasn’t been put in as yet. Coal has gone up to $18 again. Consequently I haven’t ordered any of that yet. I am getting the coke at $15.50 and will wait for the Alberta Semi-anthracite, which is coming in soon and will retail at $14.50. It is said to be very satisfactory and I want to give it a trial. I could have got anthracite early in the summer for $16, but I wanted to have the luxury of spending 2 or 3 months without paying out installments on coal and besides didn’t have the money to make the outlay. To-day our new pastor, the Rev. C. S. Roberts made his debut. He preached in German this morning on “What the congregation has a right to expect of its pastor”. He had a very fine sermon and used excellent German. To-night he is preaching in English on What the pastor has a right to expect of his congregation. The Church was filled this morning: I judge there were at least a thousand people out; and I believe Pastor Roberts made a fine impression. Bonnie and I were down to call on him and his family Friday evening. He is a young man – under 40 – and has a wife and two children, both boys, one about 5 years old and the other one. They seem to be quite nice people and I hope

they will get along well here. There is one drawback about his wife, however, and that is that she understands very little German, which will mean that with the older people she will not take very well. But I don’t think the congregation will be able to find any fault with his German. Pastor Roberts came here from Montreal and for the past 4 years has been a member of our English Synod.

The College and public schools opened up last week. There were the usual number of new students in the College, but the local patronage fell off considerably and a number of the old students did not return, so that our opening was not as good as last year. There are so far 40 students in the College. Of course there are a number of students to come in yet, but even so I do not think the enrolment will reach that of last year. There are several reasons for this. In the first place no effort was made to get students this last summer and then the Kitchener-Waterloo Collegiate made an extra effort this year and their new half-million dollar building was an attraction. Carolus entered the College this year and is enthusiastic over the work so far. He is, I might say, about the slickest looking boy over there. He is particularly taken with Dr. Potter who has him in French and thinks he will be able to speak French before long. The Board will meet on Tuesday and it is quite likely they will call Rev. Schorten, Secretary of the Canada Synod, to teach German and other subjects. In that case I will not need to do any College work, which will please me very much. The Seminary has not opened yet, so I am still on my vacation except that I have to be on hand occasionally to collect the Tuition and other fees. The Hirtles have started in with their work and, I think, are making a good impression. Dr. Hoffmann was to land in New York to-day and will be up here Tuesday morning. We will open the Seminary on the 25th and will have 10 students in the various classes. The authorities fumigated our house and let us out of quarantine on Wednesday and the children went off to school. Eileen was so anxious to go that I sent her down with them and they admitted her into the Kindergarten though she was under age and she was quite happy over it. She goes only a half a day. On account of the

crowded conditions, due to the fact that the Alexandria school’s new building is not finished, a great many other children in the lower-grades are going only half-time. Robert belongs in this class and goes one week mornings and the next week afternoons. Arthur has not been feeling very well for the last day or two and we are afraid he may be coming on with the measles, which would be disastrous, as it would mean going into quarantine again and keeping the children out of school. He had the measles at Morrisburg but he was only 8 or 10 months old then and they say that in such cases children are liable to take them again. However, he is a little better to-day and we are hoping that it will not turn out to be measles. To-day is our 15th anniversary of our marriage. We didn’t do anything to celebrate it, but I gave Bonnie a box of chocolates in memory of the occasion. She has been a very good wife to me during these years and I was sorry that I couldn’t show her my appreciation more substantially. The baby started to cry a little while ago and Ruth went to the carriage and said “Baby, don’t cry” and rocked her back to sleep. Ruth is quite recovered from the measles and is quite well again. She is thinned down somewhat and her arms and legs are hardly as large as the baby’s, but she is bright and as active as a cricket. Our new College building is going along fine. All the brick work is done and the roof is boarded in ready for the slates. The contractors say it will be ready by the first of December. Well, I have already gone beyond my limit and will close. With love to you all, I am, 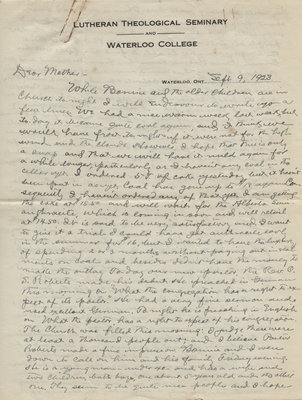