I shall have to take a little time this hot day to write you a few lines. As I am to preside at the Song Service at St. John’s to-night and make a short speech in furtherance of the cause and as this service does not begin until 8:15 it will probably be high bed-time when I get back and too late to write. So here goes it for what it is worth. Both Bonnie and the baby are getting along fine. The only trouble is with the weather, Bonnie is finding it rather trying to lie in bed during this hot spell. The baby is the best little thing you ever saw and as hungry as a bear all the time. As soon as she was born, before she was washed or anything she stuck her thumb into her mouth and began to suck for all she was worth. She doesn’t look like any of the rest of the children and has a broad rather than extra high forehead, but her chief distinction lies in her wonderful head of hair. The others were mostly bald headed or near bald. But while he hair is not very long it is very thick and very dark. It gives her the appearance of a child of a year or so old. I think her hair is thicker than Ruth’s is now. She has been very good and has given no trouble either to the nurse or to her mother. Bonnie has been remembered with flowers by some of her friends nearly every day she has been in bed. She is now counting the days till she can be up again. Our girl came the 18th, on the hour expected, and we have been getting along famously. She is a good girl and gets along well with the children. I am paying

her $25 a month and the nurse gets $21 a week, which pulls on me rather heavily at present, but I hope to get through with it O.K. Carolus came home yesterday and saw his new sister for the first time. He thought she was a wonder. He is still sleeping over at the Seminary for the want of room in the house. Next week his entrance examinations will begin. Herman and Arthur were graded on their examinations and standing through the year. They are therefore now out of school. Marion is taking her examinations and Robert his tests. Little Ruth wants to go upstairs every little while to see “the dolly baby” as she calls her. All the Professors are away now except Prof. Henkel and myself. Prof. Willison hasn’t actually gone yet but is away preaching at Hamilton to-day and will leave this week for Muskoka, his camping ground. I have the getting out of the new catalogue to look after, also the getting out of the Bulletin, the securing a house for the Rev. Prof. Hirtle and the painting of Prof. Zinck’s house. To-morrow we are having a Provincial Election. I think I will vote Tory this time. We can’t have the government much worse and a change may make it better. Besides the Conservative Candidate is the Mayor of our town and an able man. Dr. Hoffmann is now in Phil’a and will sail from New York Wednesday the 27th for Germany. He will not be back till the middle of Sept. But this doesn’t make much difference as we secured release from all College work and the Seminary will not open till the 25th of September. We should have it pretty nice next year with only Seminary work to do. St. John’s last Sunday extended a call to the Rev. C. S. Roberts of Montreal. He had another call and wrote them that he intended to accept it. This hurried them up a bit and they asked him to wait and give them a chance with the above result. His acceptance was announced this morning though he did not know as yet just when he would come. However I think it is likely he will be here about the 1st of September. When Pastor Bockelmann resigned they thought everybody would be seeking for St. John’s, but

they found candidates not as eager as they supposed and Pastor Roberts was really the only one that they heard. Hamilton has a couple of men on the string and may be supplied before long. If they have no candidate supplied I will have to preach for them during the whole month of July. In that case I will be preaching every Sunday till September. Dr. Hoffmann’s son sent his father a present of a cheque for 1,000,000 marks. At the time he got it it was worth about $200 but since then it has gone down to about 1/3 that amount. Dr. Hoffmann, however, showed us the cheque and seemed to be very proud that for the first time in his life he was a millionaire. We are having it very dry just now with the prohibition not only of spirits but also of rain. My corn and beans are flourishing but everything else is at a standstill. As for the spirits I still have plenty of wine and I hope to get around to making some beer before long. I am taking advantage of the holidays by doing considerable study and reading. Work on our new building is progressing, but slowly. I’m afraid they won’t have it done for the opening in the fall. I had a nice congratulatory letter from Bikle yesterday. They are, he said, looking forward to your visit shortly. I wish you could come up to see us also. Well, I must close. With love and best wishes, I am, 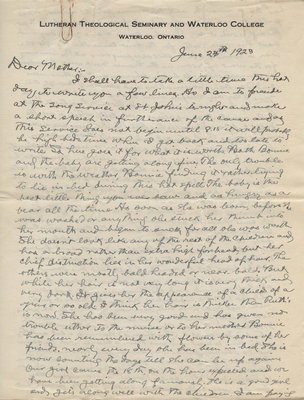