It is almost supper time and I will perhaps not be able to finish my letter before supper, but I can at least make a beginning and if necessary complete the job while Bonnie and the boys are at Church to-night. It has been sort of a dull day as it is snowing outside and I have been passing the time reading, writing and playing chess. I played three games awhile ago and lost all three – one with Herman, one with Arthur and one with Robert. In every case I had the best of it until near the end and then by a false move of which the boys were quick to take advantage I lost the ground gained and the game. We are having lots of snow this winter. It seems that it has snowed almost every day since the winter set in. Carolus has given up as a bad job keeping his rink clear and the Seminary boys are paying well for their skating by hard work in shoveling snow. Last Tuesday night they held their annual skating party. They had an orchestra in attendance and there were about 75 on the ice, mostly in pairs. I was skating but had no partner except that a couple times I skated with Prof. Willison. Bonnie says next winter she is going to start again after a rest of about 16 years. Then I will have a partner. After the skating a lunch was served consisting of coffee, sandwiches and hotdog and cake, also speeches by various members of the Faculty. I spoke on the Personnel of our Faculty and made quite a hit. Some said I made the speech of the evening. Bonnie was present for the eats and Carolus took in both. On Thursday night we had Pastor and Mrs. Bockelmann in for tea. They were in good spirits and Pastor Bockelmann

expressed himself as well pleased with the outcome of the Congregational meeting held the preceding Sunday. I think he is inclined to stay on the job now and to hold it down if possible till he can retire on pension, which will be about five years yet. He preached an excellent sermon this morning on the Epistle for the day. He is a most excellent homiletician.

I am almost out of coal again and will have to go down to-morrow and get another permit from the Fuel Controller and see what I can do. It is a hand-to-mouth existence this winter as far as coal is concerned. Happily the weather hasn’t been extreme. Otherwise I don’t know how I would have made out so far. If we can finish out this month and get through February O.K. the outlook will be more hopeful. On Friday night Prof. Willison entertained the Faculty and their wives at a progressive crokinole party. Mrs. Maurer was there and won the booby prize. Dr. Maurer was away on a visit to Morrisburg and the East in his official capacity as President of Synod. Mrs. Zinck and Bonnie tied for the prize and on a guess Mrs. Zinck won. The prize was a box of chocolates. However as Mrs. Zinck passed it around to the crowd there was nothing left to take home and Bonnie’s loss was not great.

The other day Eileen asked her mother “What is your last name?” And when she said ‘Little’ Eileen said “Why, isn’t that funny? That’s my last name too. After Christmas one of the teachers in the Public School was asking the children about Santa Claus, whether they had seen him etc? One of the little boys held up his hand and said, “Yes I saw him. I peeped through a crack in the door and I saw him put the presents all around. And after he was done he undressed and got in bed with mother, the dirty thing!” The teacher didn’t pursue the subject any further.

Prof. Henkel has been sick the past week and was unable to attend to his work. He had stomach trouble and had the Dr. around almost every day. He is able to be around again but is very weak and his trouble may be serious. Bonnie has her ups and downs. Some days she feels very well and other days quite miserable. But she keeps on with her work without intermission. Well, I guess I will close here. With love to all and all good wishes, I am 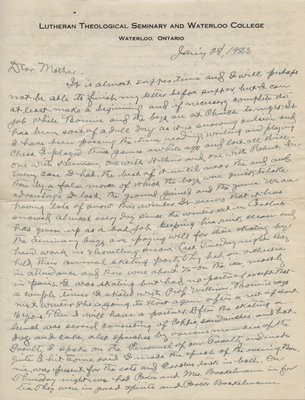