As I am going down to Brantford early to-morrow morning and will not get back till late to-morrow night I have concluded to write you a few lines to-night. Since writing you last week I received a nice long letter from Hermine. She thought the picture of Eileen was very fine and seemed to appreciate it very much. As to her health she said she had to keep her bed a good part of the time but hoped that the worst was over. Bonnie has her bad spells too, but never so bad that she has to go to bed and they are never continuous. Sometimes she has very good days. We had some very cold days this past week, but to-day opened up mild and to-night we are having a regular rain-storm which will probably take away a good part of our snow. However, we have plenty to spare, the snow being about two-feet on a level. The Seminary and College boys have arranged for a skating party on Tuesday night of next week. It doesn’t look much like it to-night but the thaw will probably be over by that time. I wouldn’t care much if it didn’t materialize as I have been asked to make a speech on the occasion at the banquet following the skating. Carolus has our whole front yard made over into a rink and we can skate all around the trees on our lawn. They have a fine rink over at the Seminary, but I have been pretty busy and haven’t taken in much of it. The boys were over this morning and they said it was fine. On account of preaching to-morrow I couldn’t get out to-day. I will have to leave here at 7:30 to-morrow morning which means pretty early rising. So I will try to get to bed by around 10 o’clock tonight. Last evening we had Dr. Maurer and wife over to tea. They

spent the evening with us. This was in requital for their entertaining of us during the Christmas holidays. Bonnie had a fine supper which I think they enjoyed. She still has the Zincks and a couple others to requite. We were surprised the other day to see in the Globe, Toronto, that Dr. Dehr was back in Toronto again. He left for Germany in Sept. last fall. Since then we hear that he is completely on the rocks and is living, eating and sleeping in one room in Toronto. Prof and Mrs. Henkel sent him a box of roast chicken and other eatables this week. He couldn’t have found things very satisfactory in Germany as he intended to stay when he left here last fall. I succeeded in getting one half-ton of coal this week and will have enough now to run me about two weeks longer. If I can get a little from time to time we will be able to see the winter through without discomfort or freezing. The cost is still rising. I had to pay $9.25 for the half ton. The children are all over their colds at last and are enjoying the out-door sports quite regularly again. The little fellows, Arthur and Robert, want to play chess nearly all the time when they are in the house and I often have quite a time to get rid of them. Bonnie had a letter this week from Don’s wife. She said Mrs. J.B. had arrived back from Phil’a and was with their mother at Mahone Bay. She had sufficiently improved, she said, to make the trip back alone. You should see Ruth these days. She talks so well for a girl of her age and size and has no trouble to make her wants known. She can also understand and speak some German and can sing a number of hymns and practically all the songs the children learn at school. She has a sweet disposition and is quite devoted to her father. Well, I must close for this time. With love to all, I am 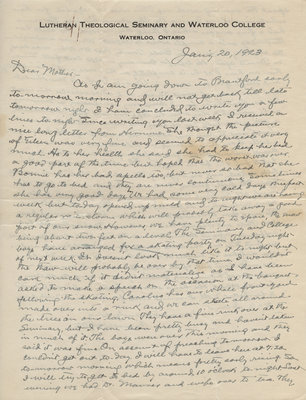