Your most welcome and highly interesting letter was received a few days ago and was read with great pleasure. I shall endeavor to give you a few words in reply to-night. I am enclosing a number of snaps Carolus took recently. He is not quite used to his developing tanks yet and they are perhaps not as good as they might be, but I hope they will prove sufficiently interesting. He wishes me to state particularly that the one of Ruth and myself was taken indoors. We have been having quite a snowy time since I wrote you last. It has snowed nearly every day this year. Yesterday we had about 15 inches of snow on a level and it snowed about 6 inches more last night and this morning, so that now we have fully 2 ft. of snow. We had some fairly cold weather also. Night before last it was 9 degrees below zero. The boys and I were out skating on the Seminary rink for about an hour that night and didn’t mind the cold. It is hard this winter to get any skating. As soon as the rink is cleaned off it snows again and spoils it. To-day it turned considerably warmer and to-night there is a mist for a change. After dinner to-day I had a telephone message from Pastor Bockelmann asking me to come down to the Church and attend the annual congregational meeting and saying that there was likely to be something doing. He anticipated, I think, that a certain antagonistic section of the congregation would ask for his resignation. But nothing developed out of the ordinary and I was rather sorry that I wasted my time going down. I was there about 3 hours and during that time there was nothing but the reading of reports, election of officers, appointment of committees, etc. It was evident, however, that the great majority of the congregation

was with the pastor and that if there had been any show-down he would have won out. I rather think Pastor Bockelmann will remain unless the opposition shows more vitality than at present and I think the congregation would make a mistake in letting him go. I wrote Mabel immediately after receiving the five dollars she sent me at Christmas. As she had her address on the outside of the mailing tube I sent my letter to her at Gastonia. I did not know when or how long she would be at home. I suppose she has had the letter long before this. If not, tell her I received it and appreciated it very much and thank her of it a thousand times.

I was rather surprised to hear of Mrs. Murray’s removal to Thiel College, Greenville, Pa., but was glad to hear that she had gotten so suitable a position. I intended to send her a card of greeting at Christmas but had mislaid her address and only came across it to-night while looking up your letter. It will be fine for her to have the opportunity of educating her daughters at Pastor Murray’s alma mater.

As to the Lincolnton Parish matters, I don’t see that I can say anything different from what I told them down at Leopold’s and Clarence’s last summer when they put the suppositious case before me. It would be nice for us to be near the home folks so that we could all get together every once in a while. But there are other things to be considered. Here I have a very congenial position and practically the assurance of a life-job. In a congregation it is next to impossible to please all and then the trend of congregations toward the younger men is to be taken into account. After a few years the tendency to want a change becomes strong. Besides I doubt if I would be justified from the amount of good I can accomplish to leave the Seminary for a parish. I hope therefore that my name will not be considered. I saw Pastor Kegley at Buffalo, but did not talk to him very much, as he had his cronies and I had mine. I presume from you letter that you do not look for him to leave the Holy Trinity parish soon. I was surprised to learn that Dr. Lahr was going to South Carolina. I thought he was a fixture for life in the Daniel’s Parish after going back there the second time. I was glad to hear that Florence

is recovering from the Flu. I didn’t know that she had been sick, which perhaps is my own fault, however , as I owe her a letter since back in November, I believe. I also owe Hermine a letter. It seems that I am a rather poor correspondent except to you to whom I write systematically. But there are others, also, I suppose. We sent both Bikle and Hermine a photo of Eileen, but haven’t heard from either one of them so much as to know whether they got it or not. Eileen came home from Sunday School rejoicing to-day because she received a pin for her first year attendance. Yesterday she asked me if to-morrow was Sunday/ When I said ‘yes’ she said “Hooray! Then I can go to Sunday School”. Arthur, Herman and Carolus also received pins, 2nd or 3rd year series. This morning Bonnie asked Arthur to go for the milk. As it was not his turn he wasn’t inclined to go and replied “I am not responsible for the milk this morning”. He likes to use big words. To-night Robert beat him at chess. He can’t stand to be beaten and nearly always cries over it. Both he and Robert usually beat me though I get a game or so every now and then. I bought five gallons more of cider last week and should have enough to last me through the winter now. I still have on hand five or six bottles of most excellent beer and my wine is still in the making. I have just about enough cool on hand for three or four days. I was down at the dealers yesterday and he had none on hand but said he had 3 or 4 carloads on the way that had crossed the line into Canada and expected their arrival by tomorrow. I hope they will reach here and that I will be able to get a supply before I run entirely out. Well, I must close. With love to you all, I am 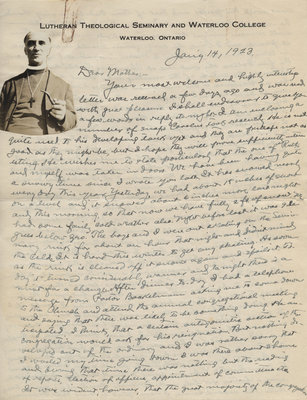