Creators
Carroll Herman Little, Correspondent
Candace Little
, Recipient
Media Type
Text
Item Type
Correspondence
Description
Handwritten letter from Carroll Herman Little to his mother on January 7, 1923. Little discusses family life with wife Bonnie and their children; his work as a Lutheran pastor and faculty member at the Evangelical Lutheran Seminary of Canada in Waterloo, Ontario; skating on the ice rink in his yard; and the municipal election results.

I have just got home from Church and put the smaller children to bed and will try to write you a short letter again to-night. I preached in St. John’s for Pastor Bockelmann to-night, and had quite a good turn-out for a Sunday evening service. Pastor Bockelmann was away over this Sunday to preach a trial sermon somewhere in the States, I believe. He didn’t tell me where he was going and I didn’t ask him, but I have no doubt he went away for the above purpose. He has been here now for sixteen years and some of the people think it is time for a change, though I believe it will be a long time before they get as good a preacher as he is again. He has quite an accent in his English to which many who speak it no better object, but his sermons are always good and applied in such a way that there is no mistaking his meaning. I will be very sorry to see him leave, but he is too old to fight it out with those who are opposing him and will go as soon as he receives a call.

We have been having quite cold weather for the last few days. Last night it was 12° below zero and although it has moderated a bit it is probably around zero now. Carolus flooded our front yard and made a fine rink out of it and for the past few days we have had plenty of skating as soon as we stepped out of the front door. The boys and I went out about an hour last night and Marion and the boys were out on it to-day. I didn’t go out as I had my sermon to get up. The Seminary rink isn’t in commission yet as they only flooded it yesterday and it is so large as to require several floodings before it is fit. When it is done it will be the largest rink in town. We had good skating down at the lake in the park till the snow came the other day and spoiled it. I am enclosing several snap shots that Carolus took last week. He wishes to apologize for them as his [?] paper was old and the pictures did not print very well; but they will serve to show you the kind of sports the children

have up here in the winter time. For in-door sport chess serves very well. Herman is the champion player of the house. I think Arthur and Robert come next and I bring up the booby prize. Robert is a “cracker-jack” for his age and size. Yesterday and to-day I played 11 games with him and only got one. He is an enthusiastic player and quite proud to be able to beat his father. The children are all better of their colds and are enjoying the snow and ice and the winter weather. Coal is very scarce, but they sake coke can be had. I still have about a half ton of each and am not worrying over the future. If we can get coke when we need it I will be quite satisfied. Little Ruth is a remarkably plain talker and can form sentences as well as any of the other children. She frequently plays that she is telephoning. She goes to the telephone, calls out ‘Hello’, talks quite a strip and then says ‘goodbye’. She enters in all the games of the children, plays hide and seek and even takes great interest in the chess games, calling out ‘check’ whenever she sees anyone playing. She is small, but dainty and very smart for her age and size. So far as I know now I will be free from preaching next Sunday, but the following Sunday I am to preach at Brantford. We resumed our work in the Seminary and College last Wednesday and will run along now without intermission till Holy Week. We were afraid some of our College boys would not be back after Christmas on account of the unpopularity of Prof. Crawford, but they are all on hand again. I must tell you before I close of the Municipal election. We re-elected our Mayor and the entire council who saved us from Day-Light Saving by immense majorities ranging as high as 600. And to cap the climax Kitchener in a referendum defeated Day-light Savings by 624 majority. So we are over this war-frenzy at last. I hardly ever bother to vote in the town election, but did so this time, as I wanted to encourage our Mayor and Council in their good work. Bonnie had no vote in this election. Well, wishing you all joy and happiness during this New Year, 1923, I am 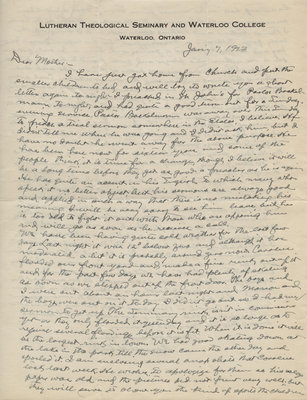