As you will notice I am down here at Hamilton to-day. I preached this morning to a small congregation of between 30 and 40 people and am to preach again to-night, after which I will leave by radial for home and hope to get there this year yet. It has been raining all day to day and is dank and dismal as though the old year is loath to depart. This accounts for the small number that was out to Church this morning. And as there is no appearance of a let-up in the weather the attendance to-night is likely to be slim again. We received your fine photo last week and were thoroughly delighted with it. I think it very good and very natural and has such a pleasant expression. Bonnie says you look younger in it than you did when you were up at our place a few years ago – which you should consider a compliment. Allow me to thank you very sincerely for this picture which I appreciate most highly indeed. I forgot to tell you in my last letter that some time before Christmas Bonnie and I had the pleasure of hearing Elman, the great Russian violinist. He played in the Capital Theatre in Kitchener and well-sustained his world-wide reputation. We had to pay $1.50 for the cheapest seats, but it was worth all the money and as we rarely take in anything we thought we could afford it for the once. Our vacation is now well-nigh over. It has been quite an enjoyable one. We did considerable entertaining during the holidays and were entertained quite as much in return. Last Wednesday evening we were down to the Zinck’s for tea. They had an elaborate supper and had invited in addition Pastor and Mrs. Bockelmann and Prof. and Mrs. Willison. We also had the Hamanns up and were down there one evening. One night we had the boys who were staying over the holidays in the Seminary over to tea. We haven’t had much skating lately on account of the snow, but the rain today will

probably remove that and it will likely turn colder to-night or to-morrow. Bonnie and the children have had pretty bad colds, but Bonnie was feeling better yesterday when I left, although Ruth and Robert were still quite bad. I think the changeable weather is largely responsible and will be glad to see the winter set in steady. I got Arthur his Bible for Christmas and he seems to be very proud of it and will no doubt make good use of it. During the past year I read the Old Testament through once in German and the N.T. fifteen times. This is my highest record for any one year although I have read it through since I kept record more than 70 times. During the vacation I have almost finished reading Fox’s Book of Martyrs. It is a most wonderful book filled with accounts of almost incredible cruelty sustained by Christians under persecution for their faith, which occurred on so gigantic a scale as to tax one’s credulity. We will begin our work again on Wednesday. A Easter comes early this year we will not have so long a stretch as usual till the Easter vacation and out Seminary will close the 18th of May, though the College will go on till the first of June. It is likely next year that Rev. Hirtle will be added to the staff as Professor of the Classics and probably Rev. Hueuergand as Professor of Science and Mathematics. To-morrow, New Year’s day is municipal election day in Canada. I am going to vote for our present Mayor and council on the ground that they saved us from Day Light saving. Kitchener will vote on the proposition, but our council which was solid against it refused the request of the Kitchener Council to submit the matter to the Waterloo rate payers. We gave Carolus a developing tank for use in connection with his Kodak and by next week I may be able to send you some more snaps. I had a good turkey dinner to-day here at Mrs. Kiebl’s where I am stopping in Hamilton. The coming of a New Year reminds us of the rapid flight of time. May the coming year be bright with blessing to you and all of yours at home and abroad! With much love to you all, I am 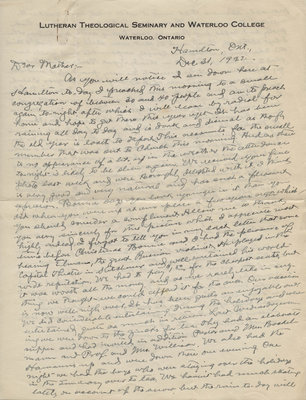