Creators
Carroll Herman Little, Correspondent
Candace Little
, Recipient
Media Type
Text
Item Type
Correspondence
Description
Handwritten letter from Carroll Herman Little to his mother on September 17, 1922. Little discusses family life with wife Bonnie and their children; his work as a Lutheran pastor and faculty member at the Evangelical Lutheran Seminary of Canada in Waterloo, Ontario; his trip to Welland, Ontario where he preached and stayed in the home of the Governor of the jail; the Seminary Board of Governor's decisions about Professor Zinck and Professor Willison's positions; and the upcoming convention in Buffalo.
Notes
-- Watermark: PROGRESS BOND

As you will see from the heading above I am again down here at Welland. I am putting up with the Governor of the Jail Mr. Kattmeier. I think he will let me out, however, this afternoon and I will go over by trolley to Port Colborne where I am to preach to-night. I preached here this morning but had only about 25 out. The congregation is small anyway and when the pastor is away the people are inclined to play vacation too. The Church, however, is small and I didn’t find it difficult at all to preach in it, and I think I gave them a pretty good sermon. Mr. Kattmeier’s son-in-law, whose name is Sermon and who lives here with them, is interested in radio and has a radio set. He caught a concert from Toronto last night and it was quite as clear if one had been present at it. It was the first time I had had the opportunity to hear a radio-concert though they are getting to be quite common and nearly everybody is installing the sets in their houses. The weather is quite different to-day from what it was last Sunday. Last Sunday was a scorcher. To-day it is almost as cold as it was hot last Sunday. There would have been a heavy frost last night if it had not been for the high wind which kept up continuously. As this is the natural gas region we didn’t mind the cold. Mr. Kattmeier had his open gas grate burning last night and this morning started his furnace with gas, so that the house has been quite comfortable. I don’t know how they fared up home last night. I’m afraid they found it cold as we have no means as yet of heating the house. There has been no coal delivered in Waterloo or Kitchener for the last three months and there is no coal or coke on hand.

It looks dangerously as though we might freeze out this winter, but we are keeping up our courage and are hopeful. Our school has been progressing nicely. We have now about 75 students on hand and several more to come and expect to reach 80 in a week or so. Two are to enter Monday and a third on Tuesday and a couple old students are still to come back.

The Board held its meeting last Wednesday and considered Prof. Zinck’s resignation. They declined to accept it and in order to hold him made him a Seminary Professor and increased his salary to $1900. And in order to placate Prof. Willison and relieve his disappointment they made him principal of the College at the same salary. Both were highly pleased with the action of the Board and I think now they may be regarded as permanent fixtures in the institution. Prof. Zinck will retain his College work for the present until a new classical teacher can be secured. Mr. Whitteker has been continued as instructor for the ensuing year and the 5th Form has been deleted for the present. Consequently the Seminary professors will not be burdened with extra College work this year; and we will be free to attend the U.L.C. Convention in Buffalo next month. I expect to go if I can afford it, and with the extra money I am making for preaching it looks as though I might. Here I am right in the fruit belt. The yield this year has never been equalled. There is so much fruit, particularly peaches, pears and plums that the people don’t know what to do with them. Peaches are sold down here at 30 and 35 cents a bushel provided the purchaser picks them. The grape crop is also enormous, but on account of prohibition the demand for grapes is very great and they may not be so cheap. As yet they are not on the market. Well, I will have to close for this time. With love to you all, I am 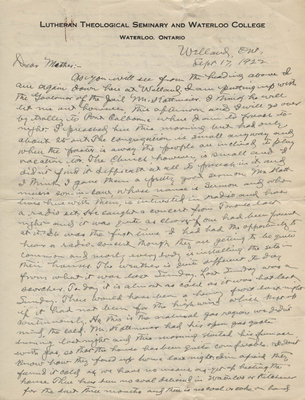