Creators
Carroll Herman Little, Correspondent
Candace Little
, Recipient
Media Type
Text
Item Type
Correspondence
Description
Handwritten letter from Carroll Herman Little to his mother on September 3, 1922. Little discusses family life with wife Bonnie and their children; and his work as a Lutheran pastor and faculty member at the Evangelical Lutheran Seminary of Canada in Waterloo, Ontario; gardening; his involvement with the Waterloo Horticultural Society; Bonnie, Carolus, and Herman's trip to the Canadian National Exhibition, while he and the other children went to the Kitchener Zoo; and Bonnie's father's will and estate.
Notes
-- Watermark: PROGRESS BOND

As I am through with my work to-day I will take a few moments before bed time to write you again, at least briefly. We have had pretty warm weather for the last two days, to-day being particularly sultry. It took it out of me to preach to-day and I am pretty well tired out to-night. But as we have no coal in sight as yet I will not complain about the heat. I only hope it will continue this way for a long time yet. Little Eileen has her arm still bound up against her chest and is still "Father’s little one-armed girl," but she is getting along nicely and will be able to have her arm restored to freedom about the middle of this week. She is very cheerful and takes her handicap in good part. She thinks it is a great joke that she has only one hand to be washed while all the others have two. Ruth walks everywhere now and is quite proud of her accomplishment. She and Eileen are great chums and have good times together. I had Ruth weighed the other day. She weighed 19 lbs. She has picked up considerably lately and is nice and plump.

On Thursday of this week I sent Bonnie and Carolus and Herman down to Toronto to the Canadian National Exhibition. They left at about 5 o’clock in the morning and got back about 10 at night. They were enthusiastic over what they had seen at the Exhibition and thought the trip well worth while, though Bonnie was so tired that she has hardly fully recovered from the effects of it yet. I kept house with the remaining five children, got the meals etc. In the afternoon I took them all down to the park in Kitchener where they enjoyed the slides, swings etc, and saw the bears, owls, coons, swans, Shetland ponies and the like of the Kitchener Zoo. The children enjoyed it and I think we had quite as

good a time as those that went to the Exhibition.

Waterloo’s Horticultural Show was held last week. Just for fun I sent Marion down with three entries, viz carrots, beets and potatoes. To my great surprize I took second prize on my potatoes. This gave me the munificent sum of 50₵. If there is one thing I never have much success with it is potatoes. I knew I wouldn’t get any prize on my carrots; for all the best ones were already used up, and didn’t expect anything on beets as I didn’t have any particularly fine ones. But if I had thought of the fair and had saved an entry of corn, cucumbers and cantaloupes I could easily have taken first or second prize on them. I think I will send a number of things down next year if everything goes well. As a member of the Horticultural Society I have the privilege of making any entries I like. My corn is about all over now. There may be a couple dozen ears left in the patch. I estimated the yield at 2500 ears and have taken off so far 2506. I sold about half of this, for which I received $20.06. I got besides about 5 bushels of potatoes, great quantities of cucumbers and tomatoes, and will have plenty of beans for winter use also considerable cabbage and turnips. I have had 3 or 4 cantaloupes so far and have a dozen or more about ripe now and some 40 or 50 more that will mature if the frost holds off. On the whole I think I came out quite successfully as a gardener this year.

Bonnie received a copy of her father’s will, upon request, from her step mother. He deeded to the latter the home place and all the household furniture and willed her half interest in the store and $5000 in Victory bonds, also his gold nugget pin. She received all this outright with out any conditions. The value of her share is not stated but must be between $25000 and $30000. Don received a deed for the store, was given in the will all the mercantile fixtures and half-interest in the business. His share is estimated at $15000. Lynton was deeded the house and land that Don lives on, and was willed $2000 in victory bonds and the barbershop property in New Germany. His share is about $5000 Max was willed his revolver and $1000 in money. Meda and Bonnie, $500 each and $20 for each child. All the

money on hand from the business was willed equally to the widow and Don. Mrs. I.B. apparently was not satisfied even with this. She suggested in her letter that perhaps the children would like to assist her in putting up a monument to their father. If Bonnie does anything in this line it will not be over $5.00. I don’t think she should give anything for the reason that Mr. DeLong already has a family monument erected at the time of the death of his first wife and with a place left on it for his name. If the present Mrs. DeLong did not have him buried there she should put up the monument herself. And so I advised Bonnie. Bonnie said before Mrs. I.B. wrote that she would probably write to her to get out of her something of what little she did get, for a memorial. Mr. DeLong’s gold nugget pin was given to him a few years ago by his first wife’s brother who spent many years in the Klondike. It was valued at about $100. Mr. DeLong kept it locked up and his present widow didnot know he had it until Bonnie was down two years ago. She happened to ask about it in Mrs. DeLong’s presence and the latter immediately made love to it with the success that the sequel shows. Mrs. I. B. is already planning a trip to Phil’a for the winter. She will probably have a good time as a wealthy widow and will no doubt be married again if she can make another good catch.

Tomorrow is labour day. School begins Tuesday. Prof. Willison and family arrived back home Friday. Prof. Zinck and wife got back to-day. We have new applications for students nearly every day and expect to have a fine year. Well, I must close. With love to all, I am 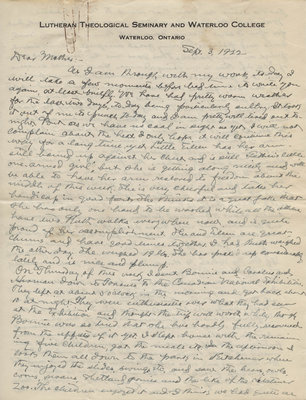