My Sunday’s work is over again and the children are tucked away in their bed and as it is still fairly early I will take the opportunity to write you a few lines again before going to slumber land. There is one advantage in Kitchener’s having the fast time and that is that I can go down in the morning preach and get home for dinner and in the evening can get home in time for letter writing or any other work I may have to do. I had the Rev. Dr. Oberlander of New York in Church this morning. He will preach for me on Sunday evening next, thus relieving me of one service. I had a fairly large congregation this morning but to-night the service was poorly attended, the number present being probably under 40. This was better than last Sunday evening however when there were only 13 present including the organist. That, however, was a rainy evening, whereas tonight it was fine. Yesterday and to-day were fairly warm but not oppressively hot. Before this it was very cool, too cool to wear my palm beach suit and too cool to go in swimming. I have been in swimming only three times since I came home and on one of those times it was really too cold for comfort. To-day was the second occasion for my wearing my light suit. Dr. Hoffmann’s daughter and family except Dr. Merscher arrived from Phil’a Thursday. The young lady who is to marry Dr. Hoffmann’s son arrived with them. I met her to-day. She is nice but not very pretty. I didn’t exactly catch the name which was a very peculiar one, but I understand she is from Virginia. Since the coming of the Merschers the children have been having a great time with Johnnie, who is about Herman’s age I think. Mrs. Merscher has a new baby only about three weeks old, also a boy. Dr. Merscher will come on later.

We have been almost living on corn lately. We had 53 ears for dinner to-day and have so far pulled

over a thousand and fifty ears. I have sold in the last two weeks nearly nine dollars worth of corn, besides eating it every day and giving away some to the neighbours and to Pastor Bockelmann. We have also had lots of cucumbers and Bonnie has bottled some 15 gallons of pickles. She has now some 75 jars of fruit and pickles put up and peaches, pears and plums are still to come. I have some 60 cantaloupes on the vines. A couple of them are beginning to turn and most of them are fairly well grown. We have had beans right along every day but they are getting a little tough now and most of what is left will go for dried beans to be eaten this winter. I haven’t dug any of our potatoes yet, but from appearances I should have a good crop. I think on the whole my garden will pay me well this year. I bought a 10 lb. pail of honey last week at 16₵ a lb. This is the cheapest I have ever bought honey in this country. It is fine white clover honey too. But I made a still bigger purchase than that last week. I bought an electric washer and wringer at a cost of $115, which I arranged to pay for on installments of $10 per month. This will relieve me of assisting in the wash and will at the same time be a great saving of strength for Bonnie. The machine is called the “White Cap” and is, I think, one of the best made.

Ruth doesn’t walk yet except when she can catch on to things or when one holds her by the hand. But she is as smart as a cricket and has so many cute ways that she is always interesting. She is improving in her singing. She can sing “God save the King” right through and also “Ehr sei dem Vater” and can hum them too. She sang last night for Mrs. Lincke and her daughter Hedwig the school teacher and they thought it was simply wonderful for a fifteen monther. There is nothing wobbly about her notes and she also keeps the time perfectly.

We have received no further information with reference to Father DeLong’s will. Bonnie should have been furnished with a copy of the will, but this will probably not be done. She will, however, sooner or later hear something of it through Meda who was present and heard the will read. If Mr. DeLong had left $15000 to the widow and divided equally among the children they would have received seven or eight thousand a piece. Personally I don’t care anything about it as I am able to provide for my own family

as long as I have health and strength, but if Bonnie had been left a few thousand it would have relieved her of trouble for the future in case I should die. However, as I have said before, we will not make any fuss over it. But all the same we can’t help but think Mrs. I. B. was too greedy.

Last week the authorities sent 76 prisoners of the Kingston, Ont. penetentiary to the Saskatchewan penetentiary in the west on account of the former being overcrowded. The population of the Kingston penetentiary doubled in the last five years – the period of prohibition which was to do away with the necessity of such institutions. I am thinking that even prohibition enthusiasts will not be so blind as to fail to see that prohibition didn’t bring in the promised millennium. I see from the papers that one of the prisoners escaped on the way. Bonnie asked me to thank you for your kind expressions of condolence in the letter you sent. She wants also to write to Mabel and will no doubt do so on the earliest opportunity. She is as usual a very busy woman. With the Willisons and the Zincks away it is pretty quiet up here on the hill now, but as the lower road is closed all the traffic comes this way and the passing of automobiles is continuous. There was a bad accident in town Monday. Mr. Jacobi, father of Rev. Jacobi of Nova Scotia was knocked off his bicycle and very seriously wounded, having his skull cracked several ribs broken and other injuries. He is still in the hospital but is improving and the doctors think he will recover. Mrs. Bockelman also had an accident in avoiding an automobile. She fell and broke her wrist. Pastor Bockelmann sent for some corn yesterday. He said he was chief cook and that he wanted something that would give him as little trouble as possible. I want to say again that I enjoyed my visit down home very much and only wish it could have been longer.

With much love to you all, I am 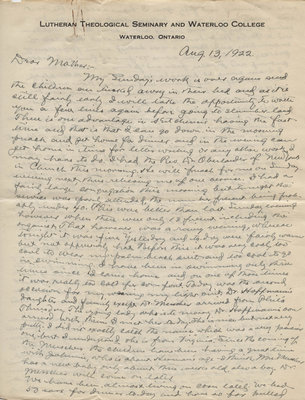