I suppose it is too late to convey Easter greetings but I trust you were blessed to-day with as fine weather as we had and that you enjoyed the services whose climax is the joyful message, “The Lord is risen! The Lord is risen indeed!” We had a large congregation this morning and Pastor Bockelmann preached a powerful sermon on Mark 16:5-7. His theme was (Translated): When does Easter arise in your heart? The answer to this question which formed the divisions was: 1.When you seek the crucified Jesus 2.When you find the risen Jesus 3.When you see the glorified Jesus. The sermon was short but right to the point. Pastor Bockelmann is a past master as a homeletician and should be a good example to our boys who understand the German. We also had communion to-day in which I assisted; but the communion was not large, there being only some sixty odd who communed. Bonnie went with me this morning, although he has communion in English to-night. The reason for the small communion to-day was the communion on Good Friday evening. That is the great communion of the year in this congregation. At that time 507 communed. I helped Pastor Bockelmann at this service also and was pretty tired when it was over. We had three services in our Church the past week besides the Confessional Service on Saturday evening. I attended all these and in addition one service in First English Church. I never was in a place where the people attended the week-day Lenten Services as they do here in all our Lutheran Churches. The Churches were filled at every service. Even the Evangelicals (German Methodists) caught the spirit and held Lenten Services and advertised them as such. They even announced on their bulletin board one evening the subject The “Via. dolorosa.” That is certainly getting pretty “High Church” for Methodists when they announce their theme in Latin. Of course their Church is made up of people who were originally

Lutheran and who have not yet lost all their Lutheran consciousness. Last night Bonnie and I coloured Easter eggs. We had four dozen and by noon there wasn’t an egg on the place, although I ate only two eggs and Bonnie the same number. I was afraid some of the Children would be sick, but they didn’t seem any the worse for it. They were wishing to-day that Easter would come at least once a month, but I’m afraid they would get tired of it at that rate. We had it very cool all last week and I kept the furnace going steadily. To-day, however, was considerably warmer although still cold enough for a little fire. I haven’t done anything in the way of the gardening yet and missed a good opportunity during the Easter holidays but it was too cold to think of it. So I will have to snatch time after 4 o’clock on school days and put the Saturdays to service. It is not yet definitely decided as to whether we will have Day Light Saving time next month or not. Our Council is unanimously opposed to it, although if Kitchener puts it on they will be almost compelled to do so. I was down last week and put in a protest to our Mayor against it and he said he would do all in his power to defeat it. There is still therefore some hope that we may escape this form of war-mania. Our school reopens Tuesday, although the public schools have this week as their vacation. As a Church school it has been our tradition to keep Holy Week. Our Synod has been set for the 20th of June and will be in session for four days – too long I think, it being tedious for us and also an imposition upon the hospitality of our hosts. The Synod will meet at Unionville. I am on for a paper on the subject “What degree of unity is necessary for our cooperation with other Churches?” or something to that effect. I am also the official delegate to the Canada Synod and as the two synods are at loggerheads over some irregularities it is not a very enviable position to be in. But I will have to do the best I can to bring about a reconciliation, which is most necessary in view of our building project at the Seminary. Bonnie appeared out to-day in her Easter finery though she became very much dissatisfied with her dress after she bought. It was too short and too long etc; but now that she has worn it

I think she is a little better satisfied with it. It wasn’t shantung silk as I stated in my last, all silk looking alike to me, but “taffeta.” I think I have it right this pop. The baby is growing a little. She is a great little mimic and is quite lively and active. She doesn’t talk much yet, but can say “Arthur” as plain as anybody and is very fond of him.

Pastor Bockelmann handed me $5 to-day as an Easter present for Eileen. I guess we will get her a nice dress with it. This year I didn’t send out a single Easter card and also didn’t get any except one from Pastor Bermon. The Board will meet here again on Tuesday and I expect we will have Pastor Bermon and perhabs also his new wife to entertain. Prof. Henkels are the greatest people for always having company. They have some of their poor relations saddled off on them nearly all the time. Well I must close. With love and all good wishes for the season of joy, I am

Most Sincerely yours, [signed] 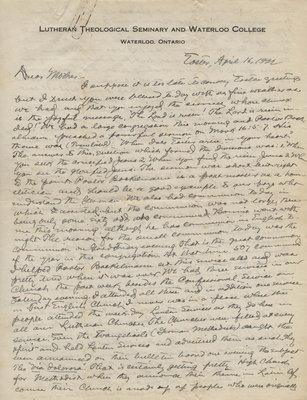