As I have a little time at my disposal this afternoon before supper I have concluded to put it to good account by writing a letter to you. Missionary Neudoerffer is to preach in our Church to-night and I may go down to hear him. He was here last week and preached in St. Matthew’s, Kitchener, but was called back to Penn’a owing to the serious sickness of his wife and son with the Flu. It was uncertain whether he would get back or not, but toward the end of the week Dr. Hoffmann received a letter from him saying his folks were better and that he would keep his engagements at our Seminary for to-morrow and Tuesday. I haven’t seen him as yet and am anxious to meet him again after an absence of 22 years.

We are having the most beautiful spring-like day imaginable to-day. It is clear, sunshiny and warm. The children are all outside enjoying the nice weather except the baby who is asleep. This morning I was down at St. John’s where I read the Service and assisted in the Communion. It was a small Communion, only about 30 Communicants. This is always the low water-mark for the year. The big communion is on Good Friday evening when there are 5 or 6 hundred communicants. On Easter there are usually between one and two-hundred. Last Sunday evening I preached in Elmira. The Pastor of the congregation there Rev.

Strempfer can preach only in German and as the congregation requires some English they have agreed to pay extra for English preaching and draw on our Seminary for it. They pay $10 a service, but one has to furnish his own conveyance. I got Prof. Henkel’s horse and driver for $2. As the day was mild and there were concrete roads nearly all the way I didn’t mind the drive and got back home before 10 o’clock. I had a fine congregation out and must have made a fair impression as some of the members told the driver that he should bring me back again. Last week we received news of the death of Mrs. Dr. Schaefer. Dr. Schaefer was Prof. in our Seminary for one year two or three years ago and is now Professor in the Chicago Theol. Seminary. Mrs. Schaefer had the scarlet fever in Chicago and after getting over it went to her home in Phil’a. I suppose it left her, as it usually does people, with some weakness and which resulted in her death. She was a rather young woman, being under 40 years of age. She was quite a fashion plate when she was here but otherwise rather a nice, pleasant sort of woman. Another death that we heard of last week was that of Dr. Bauslin of Hamma Divinity School, Springfield, Ohio, who died suddenly. Dr. Bauslin delivered the Reformation address in St. Matthew’s a year ago last fall and was an able speaker. His death will be quite a loss to the Church. We are getting along nicely with our College and Seminary work. I am finishing up N.T. Theology and will hold an examination on it this week. This will give me more time to devote to some other subjects. Yesterday Bonnie and I and Marion went over to Kitchener to do some shopping.

We bought Marion a very nice spring coat for $10, also a spring hat, so that she is pretty well fitted out for the present. Bonnie also got herself a spring hat. She contented herself with a black sailor hat which cost only $6.00, so that I consider that I got off very lucky on that deal. I was around also to see my man about my suit, but he didn’t have the black cloth on hand yet and as I want a suit for Sunday wear I didn’t care to take a grey. Consequently I have to wait a few days longer, but I think my old suit will hold out all right. At the school examinations last week Herman stood first in his room. He will probably not need to stand the finals in June. Arthur had an examination in Arithmetic and made 90 and as this is his weakest subject he bids fair to come through with honours. He and Robert are learning to play Chess and can put up a pretty good game already. Arthur can occasionally beat me. My beer is so active that it spouts up to the ceiling unless I am very careful in opening it. We have a bottle or so nearly every day. The baby has eight teeth and likes to eat things now. She can stand up if she has something to lean against, but doesn’t get much of a chance to develop walking stunts. Carolus has been taking some more pictures lately and will no doubt send you some snaps again before long. At our House Committee meeting Saturday the Com. authorized me to have the dining room and study floors painted again and some other needed repairs made. I don’t know what I will do while this work is going on, but perhaps I can study in the Kitchen. Give Herbert our congratulations on the attainment of his 46th(?) birthday on Wednesday the 15th. With love to all, I am 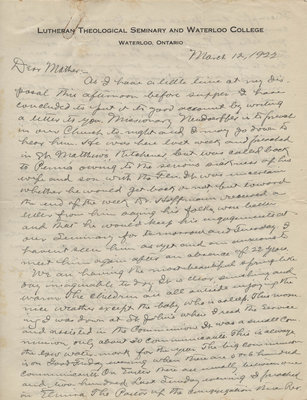