Your very welcome and most interesting letter of the 17th inst was received a few days ago and was highly enjoyed. I will endeavor to answer it tonight, though I will not be able to mail it before to-morrow afternoon as I forgot to get some stamps yesterday and am completely out. But as Carolus wrote you in the middle of the week I suppose a little delay will not matter much. I was glad to know that you were pleased with the Faculty picture I sent you. If you had looked on the cardboard in which the picture was wrapped you would have seen the names in regular rotation; but as you didn’t do so apparently, I will give them here: From left to right, front row myself. Prof Zinck, Dr. Hoffmann, Prof. Willison, Prof. Henkel; standing, back row Dr. Dehn, Mr. Whittaker (wearing glasses, don’t remember the order). Our new building will contain our Assembly Hall. The present chapel will continue to be used but will be enlarged by taking in the present Assembly Room. Tell Herbert for me that the only way I can account for the fact that Clarence and I have bald heads is that we use our brains. As to wearing a hat to and from the Seminary I thank you for your advice but don’t think I will follow it. I haven’t worn a hat on that trip since school opened last fall and was never so free from colds as I have been this year. In fact I haven’t even had a cold in my head which I attribute to the fact of hardening my head to the weather. The Ministerial Relief is an excellent thing and one of the good features about the U.L.C, only it doesn’t pay enough. But perhaps it will reach a higher standard in time. I suppose Carolus told you of our sleet storm. It did a great deal of damage to the trees in Waterloo and Kitchener, shut us off from

Hydro power for a day and a half, stopped the street car service and interrupted telephone and telegraph communications for about two days completely isolating us from the outside world. Since then there has been ice every day and many is the fall that occurred. I fell Friday night just in front of the house and sustained several hard bruises but nothing more serious. It has been a great time for skating. The boys and I were out this afternoon and skated all around the trees on the front lawn and over the Seminary campus besides skating on the rink. Robert fell and struck his forehead raising a lump. He cried a little but wouldn’t come in. He has too much grit to give up for a little knock like that. Yesterday I took Eileen up to the sandpit hill for tobogganing. The hill is almost a half-mile long and we went down like the wind. Eileen enjoyed it very much, even though the toboggan upset a time or two. But she might well enjoy it as Carolus and I hauled her up the hill each time and so she had a ride both ways. We have great times here in the winter and I think the children would miss [?] if they lived in a warmer clime. Bonnie wasn’t very well to-day. Yesterday she took something like the grip and ached all over and then it settled in her breast and made it very sore. So she didn’t go out to Church to-night, though I think she is now feeling some better. We had Rev. Weidenhammer as preacher at St. John’s this morning. He is one of the early graduates of our institution and is located at Laird, Saskatchewan. For the past 6 or 7 weeks he has been touring the Eastern States in the interest of Saskatoon College and Seminary and came by here to see his and his wife’s people before returning to the west. We had him here for tea last evening. He was a special friend of mine when he was located at Conestogo and we used to go out on fishing trips together. He gave us a fine sermon on Philip and the Eunuch, Acts 8:30[?]. He complimented me very highly on my German and said my pronunciation

was well nigh perfect. He wants me to come out during my vacation sometime and see the west and make my expenses by preaching German. I hope I will be able to do so sometime. Last week I made five gallons of beer. It turned out to be excellent, the best home brew I have ever tasted. I doubt if they could beat it in the brewery. I had 31 bottles holding a pint and a half each and have so far used but one bottle, just to sample it. Bonnie says it is better than the ale they make at the brewery of which I have a couple dozen bottles. But she is not much of a judge in such matters as root beer and ginger-ale and such drinks are more according to her taste. I am however, well satisfied with my first attempt at brewing and can now snap my fingers at bone dry prohibition. We held our Chess Club meeting on Friday night and played several games. I didn’t win any as I played against Prof. Willison who is our old stager, but am learning the moves and hope to be a player some day. Next Sunday evening I will preach in Elmira. They run a motor bus from Kitchener and Waterloo to Elmira every day now. I will be able to go up and back for $1.00 which will leave me $9 to the good, but I will have to stay up there all night Sunday night. We are expecting Rev. Neudoerffer from India sometime next week. I will be glad to see him as we used to be very intimate in Seminary days and I haven’t seen him since, though we corresponded for some time after he went to India. Our little Ruth has a whole mouth full of teeth, 8 I think and more coming through. Everybody thinks she is such a bright, intelligent looking baby. Arthur is nearly through the N.T. the second time. I think he has only Jude and Revelation to read yet. Well I must close. With love to all, I am Most Sincerely yours, 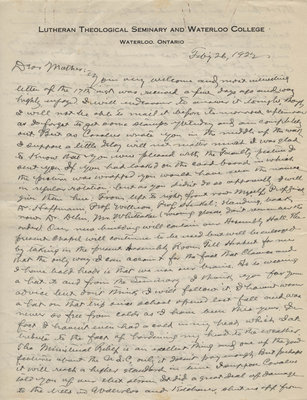