As Herman and Arthur have both written you to-night it seems almost superfluous for me to write you also. Merely out of force of habit and to satisfy my conscience in the matter I will add a few lines. The “Jail Bird” to whom Arthur referred in his letter was a young Kitchener man who was in jail all winter on the charge of murdering his wife who was drowned in his company one night last fall while crossing the Grand River in a scow. All the circumstances were very suspicious but there was an element of doubt and the jury gave him the benefit of it by acquitting him yesterday. As the family ranked in high society the case created quite a sensation.

We had the coldest weather of the winter this week. It was steadily cold all week until to-day when it moderated very considerably. Most of the week was too cold for comfortable skating though I got out on the ice several times. Robert was quite game too and was out several times when it was below zero. He is quite a good skater and can get over the ice real fast. I am writing you to-night because I am to preach in Hespeler to-morrow night and do not to have to write after I get back home which will be somewhat late. I am booked to preach again on March 5 in Elmira. I don’t mind preaching once in a while as it keeps me in practice and also incidentally ekes out my income. Bonnie thinks we are living in a barn and keeps clamoring for curtains, mats etc. to make the place look livable. It

may be that with these extras I will be able to satisfy some of these requirements and by and by also to pay back what I owe to you. Up to the present I have had all I could do to keep the family clothed and fed but as prices are coming down now I hope to do a little better than that and save up something as I go along. The Board met in special session Tuesday and adopted our proposed plans for a new building. But as the matter must come before the Synods for ratification we will hardly have our new building before Christmas of this year. This is unfortunate; for if we have anything like the increase next year that we had this year we will not know what to do with the boys.

The children nearly all have colds of a bronchial nature just now, due to the extreme cold I presume but they are all getting better at present. I have escaped scot-free so far this winter. The law suit for the possession of the Baden Church between the Canada & Mo. Synods was tried yesterday and to-day. The judge reserved his decision and gave them fatherly advice to settle the matter among themselves in a Christian way. But as neither side has enough grace for that I suppose he will eventually give his decision. I saw Pastor Bermon only for a few minutes at the time of the Board Meeting. He seems to be quite happy with his new wife. Well, I must close. 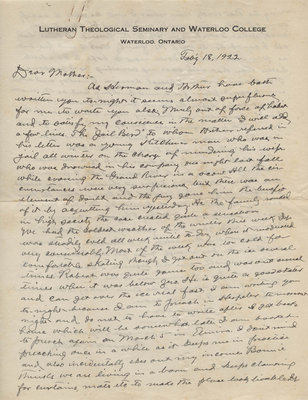