Creators
Carroll Herman Little, Correspondent
Candace Little
, Recipient
Media Type
Text
Item Type
Correspondence
Description
Handwritten letter from Carroll Herman Little to his mother on February 12, 1922. Little discussed family life with wife Bonnie and their children; his work as a Lutheran pastor and faculty member at the Evangelical Lutheran Seminary of Canada in Waterloo, Ontario; his opinions about the United Lutheran Church; the weather; the Sunday School Teachers' banquet; and plans for an addition to the Seminary Building.
Notes
-- Paper watermark: PROGRESS BOND

I had intended going skating this afternoon but it is so stormy that I concluded it would be more comfortable to stay in the house. In the meanwhile I will improve the time by beginning my letter to you. We had quite a break-up of the winter Friday and yesterday, but to-day opened up rough and cold and this afternoon there is a snow storm accompanied by high wind. It is also very cold and everything outside is frozen up. I was down at Church this morning and heard Rev. Lange who for 14 years taught in a University at Vienna but came over last summer and took charge of a mission parish in Northern Ontario in the Canada Synod. He is an able preacher and in his sermon made reference to conditions prevailing in Austria and taking 1Pet. 1:7 as his text urged the people to prove the reality of their faith by relieving the suffering that exists over there. He will preach in English again tonight. He speak English perfectly without any accent, having spent some years in the U.S. before taking up educational work and also having taught English in the University. Pastor Bockelmann conducted the Liturgical Service, so that I was completely relieved this Sunday. Mrs. Bockelmann is not very well being troubled with a touch of anemia, but is I believe in no immediate danger. Prof. Zinck and I were the speakers at the Sunday School Teachers’ banquet in Preston on Tuesday night. They had the usual lay-out, viz. wieners, potato-salad, cold

slaw, coffee and cake. We furnished the intellectual and spiritual pabula and perhaps gave them something to think about. They paid us a dollar each which left us with a half dollar or a little better over our expenses. Rev. Knauff, who is famous for his unintentional Irish bulls, after praising our excellent addresses said he hoped they would have more profitable speeches next year and when we laughed he didn’t know what we were laughing about. Rev. Knauff is not noted for his intellectual ability, but is tactful and is getting along well in Preston, which is a rather difficult parish to handle. The congregation at a recent meeting voted to pull out of the Canada Synod, the intention being to join our Synod; but for the present it will remain independent. The danger is that if they are independent a year or so it will be difficult to get them to connect up with any synod. There will always be a party more or less strong which will favour staying out on account of the expenses of Synodical connection.

Dr. Maurer went over last week to the meeting of the Presidents of the U.L.C. Synods at Harrisburg, Pa. and instead of standing up for our Synodical actions agreed to become responsible for the rescinding of certain actions we took at Synod to which the U.L.C. authorities took exception. The latter seem to want to dictate, and if we [?]

submit we might as well hold no conventions and allow them to make up our minutes. I anticipate that we will have a fight on at Synod over this demand. Personally I would rather be out of the U.L.C. anyway. The old General Synod seems to be in the saddle and it is making rapidly for loose Lutheranism. It lays down good and sufficient reasons for example for refraining

from the Federal Council of Churches and then turn round and coquettes with them and appoints consultative representatives and agrees to cooperate along certain lines. Its testimony is equally equivocal on the subject of Secret Societies and other matters, and it is so lordly and dictatorial that I confess I have never felt at home in it, though it pleases those of laxer tendencies. I guess I feel toward it somewhat as you do towards Pastor K. – an indulgent sort of tolerance.

The work at the Seminary is moving along smoothly. This is the easiest and most pleasant year I have put in here so far. Next week the Board will meet to consider the plans for the new building. This will cost between 30 and 40 thousand dollars and will practically double our capacity. I will send you to-morrow the group picture of our Faculty to show you what a nice looking bunch of men we have. You will observe that I am looking pretty well. Last week Prof. Willison, Prof. Henkel and myself and several of the boys formed a Chess Club to introduce this royal and intellectual game into the institution. I am just learning to play. Profs. Henkel and Willison know the game and are the chief instructors. I think I will enjoy it very much. We had some very good skating last week, but the skating party proposed for last Friday night was broken up by the soft weather. However, prospects are good for the coming week. Have you heard from Mrs. Murray since her husband’s death. I am not unmindful that the 17th of Feb’y is only a few days off. But I must close. With love to you all, I am 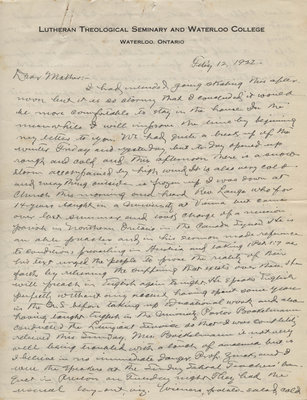