I am writing to you to-day under similar elemental conditions to those of last Sunday, only to-day the wind is if anything heavier, the storm more violent and the temperature colder. If the storm which now around supper time shows no signs of abating Bonnie will hardly venture out to Church to-night, though the older boys will probably go. Yesterday was a bright mild day, but it was a storm breeder. The weather so far this winter has been as regular as clock, the storm centre always coming around the week end. This is the fourth stormy Sunday we have had in succession. We have had very little snow this winter and every time enough falls for sleighing the wind comes along and heaps it in piles leaving most of the road perfectly bare. We have had a pile of snow 3 or 4 ft. deep in front of the Seminary all winter. It is not object of beauty either being almost as red as clay. Everything around here is the same colour on account of the dirt blown off of Shantz’s ploughed field. Yesterday we had some great ice and fine skating on the Seminary rink and the boys and I had quite a nice time there yesterday afternoon, but it was too windy and cold to tackle it to-day and the rink is also probably covered with a mixture of snow and dirt. I was down at Church this morning. The congregation was not as large as usual but was

very good considering conditions. I read the service for Pastor Bockelmann as usual. I haven’t had any preaching to do lately, but am booked for the first Sunday in Feby at Hespeler and probably for the Sunday evening of the second Sunday. I may preach there in German some Sunday this winter as I am being strongly urged to do so. I would like to be able to preach in German and I suppose I ought to make a start before I get too old to learn. You know I will soon be fifty years of age. A half century is a considerable life-time. We had a new student last week, a Mr. Snyder from Brooklyn, New York. He is a son of the late Dr. W. A. Snyder and wants to prepare for Canadian University matriculation. He is the second student we have from the States, the other being a Mr. Vonkoper from Davenport, Ia. Mrs. Emmeline Pankhurst, the notorious English suffragette is to deliver a lecture in one of the Kitchener theatres to-night. Bonnie had been counting on going over to hear her, but has backed out on account of the weather. I have still about 35 cigars out of the two boxes that I got at Christmas which goes to show that I am not an over-inveterate smoker. I still have also about half a gallon of cider left which serves to show that I am not over-indulgent in drink either. The cider concoction makes about the best and healthiest drinks I know of. My wine is developing an excellent quality. I haven’t drunk any of it yet, only just sampled it a time or two to see what it was like. Last week one of the students, presumably one of the day students took my pair of perfectly good rubbers while I was in chapel and so far I haven’t required them though I have posted several notices on the Bulletin Board about them. The last one reads as follows: “If the gent who removed my rubbers from the lower

hall thinks that I haven’t enough boys to buy rubbers for he is requested to present himself immediately before me for adoption”. Fortunately I had another old pair of rubbers with which I could make shift. Arthur and Robert still continue attending the German Vespers and are becoming quite proficient in German. Yesterday Carolus took a few pictures. They are not developed yet, but if they turn out any way good at all I will send you some samples, perhaps in my next letter. The baby sits up alone and might possibly be walking by this time if she had a chance to get down on the floor. She tries hard to talk, but doesn’t articulate very clearly as yet. Arthur is keeping up reading his Testament and is now down to 1 Thessalonians. Herman finished Deuteronomy to-day and penetrated several chapters into Joshua. Marion has resumed her reading also and is somewhere in Numbers. Carolus is interested at present in Library books, principally Indian stories and doesn’t devote so much time to Scripture reading, though he and Herman regularly get up their memory verses every Sunday. Little Eileen is as fat as she can be and of such a bright sunshiny disposition. She is very sympathetic and if any of the children cry she bursts out crying and says the one that is crying made her cry. When she asks for anything and says please and we pay no attention to her she winds up by saying “Father, or mother (as the case may be) I’m asking you”. She can sing all the German hymns and Glorias that Arthur and Robert sing and always gets the words correct. I haven’t heard from Pastor Bermon since he was married but notice his marriage mentioned in last week’s Lutheran. It seems that he had a Church wedding.

Bonnie said I should tell you she is looking forward to a musical treat next Tuesday evening, the Koschanski-Gilotti concert. I don’t know whether I have spelled the names right or not, but the former is a world renowned violinist and the latter a celebrated pianist and student of Liszt. Mrs. Balhmer of Kitchener is taking her to this musicale. Things are moving along nicely at the Seminary. I have collected nearly all the tuition for the 1st Semester $1525 with only about $60 outstanding. The tuition fees this year will run over $3000. So if I don’t get more than $2000 salary I get to handle a good deal of money in the course of a year and can’t forget at least what it feels like. Bonnie has been after me all winter to get a suit and an overcoat. I can’t get both just now, but as overcoats are about half price now, I may buy one when my cheque comes in the end of this month. If I get considerable preaching to do I may be able to get a suit also before long. Well, supper is ready and I will have to stop. With love from us all to you all, I am 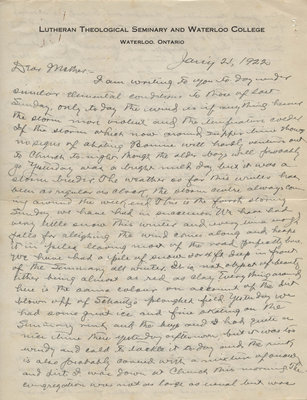