Your very welcome and highly interesting letter of the 8th inst came duly to hand and was very much appreciated. We were glad to hear that you were having so enjoyable a time visiting around and participating in the gorgeous feasts prepared no doubt largely in your honor. Wish you were near enough that we could have you also, although I fear we would not be able to compete with the others in the richness of the spreads. I was glad to hear also that you were able to restrain your appetite in spite of the temptation of alluring viands so as not to eat too much. That is an accomplishment that I have learned too within recent years and neither turkey nor goose nor any other famous dish leads me to over indulgence. In eating as well as in drinking it is a good thing to know just when to stop. To-night we are all at home. There was no Church service in St. John’s owing to the annual congregation meeting being held this afternoon. This always lasts from 2 o’clock till 6 and doesn’t leave time for the people to go home, get supper ready and be back for service at 7. Hence it always knocks out the evening service on the Sunday on which it is held. I have never attended one of these meetings on account of the factional discussions which sometimes take place and which

I want to keep out of. Last year I went skating while it was on, but to-day was too stormy. I didn’t get out of the house after coming home from Church this morning. The wind was very heavy and there were frequent snowsqualls and dust was every where. It seems as if all of Shantz’s ploughed field above our place were blown out over the surface of the surrounding country. The little snow that was on the ground is all red and the house and the barn are ditto. Just at this point my letter was interrupted by company who came in to spend the evening, viz Rev. and Mrs. Sorensen and Mrs. Sorensen’s father and mother, Mr. and Mrs. Baldue and a Miss Call. Mrs. Sorensen entertained us with solo selections, Bonnie playing the accompaniments and I entertained Mr. Baldue with cigars. This kept up till about half past ten, and it is now pretty late for writing and I will have to rush my letter to a close. As the weekends have been the storm centers for the past three weeks Carolus has had little opportunity to use his Kodak as yet. As soon as he gets some good pictures I will send you some samples. The children had their “band concert” to-night. It would do you good to see Eileen sing. She puts so much life into it. She is a cute little girl any way and has such original ways about her. This afternoon Carl Oetzel was here and she gave him a Church Book. She then came to me and said “I gave Mr. Oetzel my Church Book”. Carl you remember perhaps is about Carolus’s age. Arthur sings a piece called Poor thing and the way he gets it off would bring the house down. From going over to German Chapel he has learned to sing the Gloria Patri in German. He can render the tune of almost any hymn he hears whether English or German. He has picked up considerable German by attending the Vespers at the Seminary. We had very good skating all last week. I was down

at the lake in the park every afternoon after 4 o’clock except Saturday when we had our House Committee meeting in Kitchener. Robert was with me nearly every time and is learning to skate quite well for a little fellow. He has the grit and the determination and is bound to succeed. All the children were out Friday night on the Seminary rink. It was a fine moon-light night and not too cold and the skating was fine. We have had very little snow so far, scarcely any sleighing though it has been quite cold at times. The ice on the lake is at least a foot thick. I like skating very much myself and find it splendid exercise. I haven’t had a tumble this winter, which shows that I am not too bad for an amateur. Well it is getting so late that I will have to stop as we must get up early to-morrow morning, it being wash-day. I will try to do better another time. With love and all good wishes, I am 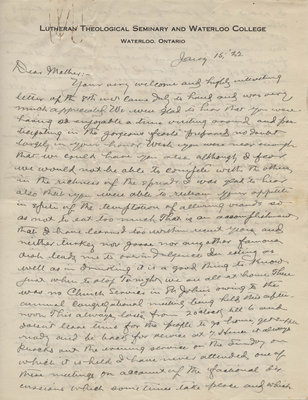