The first week of the new year has rapidly flown by, and one week of the home-stretch in College and Seminary work has passed already. Two more students entered after the holidays, which brings our enrollment up to 74 or 75. It is quite a bunch of boys when they all get together at the morning chapel. The work started off briskly on the 3rd and is now again well under way. Our next holiday season will be around Easter, which, as you know, comes very late this year. As Easter controls the Seminary year we will run till the first of June this year and close simultaneously with the College. Last year we got out almost a month before the College men did. Bonnie says I got fat during the Christmas holidays. I said, With plenty to eat and drink and smoke I ought to get fat. I haven’t had an opportunity to weigh but believe I would pull the beam at 160 or more. We had some real good skating this last week though the ice was slightly covered with snow. I was down on the lake this afternoon for about an hour and was enjoying the sport when there came up such a heavy wind and snow squall that I had to return to the house. Arthur is still reading his N.T. He finished the Book of Acts to-day. Herman is reading the O.T. through and has finished Leviticus. Carolus is reading the N.T. and is about through Matthew. Marion and Arthur had a little squabble to-night and Marion said to Arthur “I don’t think you are much of a Christian even if you are always reading your Bible”, thus showing that she has an idea of application. On Wednesday afternoon of this last week the funerals of Dr. Weidenhammer

and Pastor Boese were held. Profs. Willison and Zinck and Dr. Dehr and Mr. Whittaker attended the former, while Dr. Hoffmann, Prof. Henkel and I attended Rev. Boese’s funeral. The day was a wretched one. It rained “hail and pitch forks” steadily the whole day; but in spite of the inclemency of the weather both funerals were well attended. According to the paper, Rev. Boese’s funeral was the longest ever seen in Kitchener. Two sermons were preached, one in German and one in English. Both were eloquent tributes to Pastor Boese, his character and his work. Pastor Boese died of heart failure on his way to Linwood where he was to preach Sunday evening. He had been dieting for some time for high blood pressure and on the way up his Ford got stuck in a snow bank and he overexerted himself in trying to get it out. He was just two months younger than I am, having been born May 27, 1872. He left a widow and five children, 4 girls and one boy, all about grown but all still at home. I think it is likely that Pastor Gallmeier of Elmira will be called as his successor. He preached the English funeral sermon and is a young man of pleasing appearance and is a good preacher in both German and English. I don’t know how well off Pastor Boese left his family, but at any rate they should be able to make their way. We had our first communion of the year down at St. John’s this morning. I assisted Pastor Bockelmann. He preached a fine Epiphany sermon from Matt. 2:2. His funeral sermon for Dr. Weidenhammer which was in English was published in full in the Kitchener Daily Record of the next day. I don’t think you met Dr. Weidenhammer as he was away the summer you were here. He was, though a doctor, a very devoted Christian and intensely interested in all Church work, especially in the educational work of the Church. He was only 54 years of age and leaves a wife and one child, both well provided for. I forgot to tell you when I wrote you before that Pastor Bermon was married on the day after Christmas. He married a Miss Cremer from the congregation at

Port Colbourne. He went over to Buffalo and spent a short honeymoon of about a week, since which time he has been back in his parish. I don’t know how long he will stay there, though, I understand, the majority of the congregation are well-satisfied with his marriage. I understand that his sister, who has been keeping house for him is going to return to Detroit and take his father and mother with her. This will relieve the new wife somewhat as she will then have only his four children and himself to look after. Pastor Bermon will probably be up here again before long as a special meeting of the Board is to be called as soon as we get the building plans in readiness for their consideration which we will probably have ready some time this week. Robert was highly elated Friday. His Uncle Dan sent him a 25₵ bill in a letter as an expression of appreciation for the post card he sent him at Christmas. He spent it all Saturday but drew it out by making 3 or 4 trips down town and buying a little at a time. All the children take great stock in dominoes and even Robert plays a very good game. They had a great time playing dominoes this afternoon. Carolus hasn’t had time to develop any more pictures but we hope to send you some good snaps some time before so very long. Well, I don’t think of anything of special interest, so I will bring my rambling remarks to a close. With love and all good wishes, I am 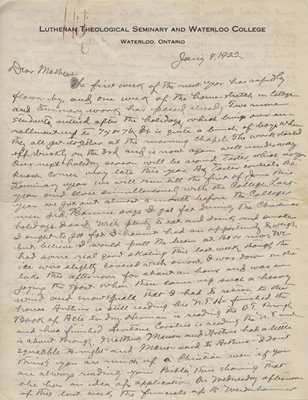