A happy New Year to you all! May this New Year bring its richest blessings to you and yours! This is my first letter of the New Year and in my anxiety to get the date correct I almost wrote Jan’y 2. It has been a beautiful day, bright and cold and quite in contrast with the way the old year went out. Yesterday we had a blinding snow storm that raged all day and way into the night accompanied with the rushing of a mighty wind. But to-day has been all that could be desired of a winter day. I was at Church this morning and heard a good New Year’s sermon from the Gospel for to-day. Bonnie and the big boys are down at Church to-night to hear Prof. Zinck. We had a fine week last week. The weather was fairly cold with special emphasis on the fair and the ice was excellent for skating. I was down on the lake nearly every day, some times twice a day and frequently all the boys were along and occasionally also Marion. Robert is learning to skate and gets along quite well for a little fellow. He is very ambitious to learn and no amount of cold or number of tumbles discourages him. He is always game to go and always ready to stick it out as long as the next one. I think he will make a good skater before the season is over. For the present, however, the snow which fell yesterday has spoiled the skating, but it has made good ground for tobogganing which will be the next sport on deck. I think children who live in warmer latitudes miss much of the joys of life from not having the winter sports which go with ice and snow. It sounds real cheery to hear the sleigh bells again. Up to now we have heard very little of them this winter. Our

vacation is now drawing rapidly to a close. Our Seminary and College reopen Tuesday and the public schools the same date. The children have had a real good time during the vacation and I think I have enjoyed it as well as any of them. I am quite a boy again when I participate in their sports and games. I got Herman a checker board for Christmas and Arthur a set of dominoes. Herman can beat me at checkers and Arthur at dominoes. In fact Arthur is a cracker-jack at dominoes and can lick any body in the house. He is as quick as a flash and knows all the tricks in the game. Out of six games I played with him to-day he got four. He is also racing with me in reading the N.T. through and is ahead in that too. Since Christmas he has read through Matthew, Mark, Luke and ten chapters in John. He takes great delight in keeping ahead of me. He has a lead of ten chapters to date. He remembers well what he reads also and can talk very intelligently about it. Last night Carolus and Herman had a number of boys in last night for a New Year’s party. They had a magic lantern and gave a very fine showing of picture post cards. Carolus has taken a number of pictures with his Kodak and has developed a few, but they are not particularly good and I will wait awhile till he learns the developing process better before sending you any snaps. We had two rather sudden deaths in the Twin city within the last 24 hours. Dr. Weidenhammer of Waterloo died at about 9:30 last night. He had been sick for a long time with internal cancer but kept up his practice to the last. He died from hemorrhage. The other was Rev. W.C. Boese, of Kitchener (Mo. minister). He preached as usual this morning and died suddenly from a stroke, I suppose some time this afternoon. He was a very able preacher – the best in German around here. He has been in Kitchener for more than 25 years. On Friday evening Bonnie and I were invited to Prof. Zinck’s together with Prof. and Mrs. Willison, where we had tea and spent an enjoyable evening in a social way. To-day we celebrated New Years by eating two more of our

fowls – a young rooster and our old white Wyandotte hen. The latter was one of the fattest birds you ever saw and would probably weigh about five lbs. dressed. It was no trouble, however, for our healthy family to finish the two of them at one meal. Dr. Hoffmann got back from Phil’a Friday night. He said it was so warm down there that he felt like a fool with his fur coat on.

Our prohibition authorities informed the brewers that they would close their eyes to any increase in the strength of beer during the holidays and so many people were able to have Christmas cheer with beer of pre-prohibition strength. There is no law against one’s making his own beer and our stores here sell all the requisite utensils and materials for its manufacture as well as the recipes for making it. I think I will make some as soon as my cider-mixture is out of the barrel. Last week the Faculty met with a Committee of the Board to draw up plans for an additional building to be erected next summer. We agreed on a general plan and will meet to-morrow again to work out the specifications. The new building will join on the the present building and will be of the same style, making it 64 ft. longer. It will enable us to accommodate the expected increase of students next year and will probably serve for some years to come. You should have heard the children sing and recite at our “band concert” to-night. Little Eileen is too cute for anything. She sang a solo “I washed my hands, this morning” and acted it off to perfection. They always enjoy “the band concert” and can scarcely wait for mother and the boys to get off before they begin it. Ruth is growing very rapidly and has four teeth now. She is a jolly little soul and is loved by all. But I must now close. 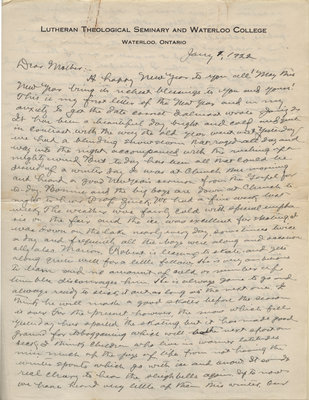