Your kind letter re your call received this Friday the thirteenth, a bad omen. Nevertheless, I have nothing to change my opinion as expressed in the letter forwarded to you a few days ago.

There is only one thing which I want to refer to for reasons which may be evident to those who have had experience. I mean the reference to a statement in Deutsches Lutheranes which I saw at Mt. Airy while attending the Summer School. The Canadian reporter – (used to be Prof. Lincke) states that Prof. Lincke is relieved of all English instruction and that the Synod urgently requests the Board to call a German-English Professor for the Seminary.

I too was called as Pres. & Eng Prof. but found out later that the Germans counted on me to espouse their cause. Since I followed the conditions of the call, I incurred the displeasure not of the aggressive Germans, but of the Iron Ring of the Synod. Fortunately the war made the plans of the ring ineffective, & I am still at the helm, not with a prejudice against the Germans who are loyal to Canada, but with the firm determination never to yield to the Kaiserites, who will stop at nothing to win their point.

The men with whom you will deal, or come in contact, are staunch & loyal friends of the institution and its interests. Why your call should read “English Professor”, which is the only thing that can be acceptable to the General public at this time. Why the

‘Canadian reporter’ should say “German-English” I do not understand. I report it because I do not want you to go through the same experience I had. If, however, you do not consider that point worth your further attention, then let us consider the matter dropped.

As already stated, my heart’s desire is that you may see your way clear to accept and see it so clearly that your people will also see it in the same light.

I never had better friends than my parishioners at Perkasie. My recent visit there confirms that relation, but there is not one who, though he regrets my absence, will not say I am doing a God given work. If you can explain your call to your people so that they see the divine call, they will not only consent but ask God’s blessing on your future work; while God will provide a man who will carry forward His work.

You will be of great value to the institution, if you take History-General, Canadian & Church; Practical Theology; and Catalogue Page 16:IX; some Latin & may be some Greek; Logic; Catechism & Bible Literature. You notice the work is enough to keep you out of mischief. If Prof. Lincke refuses to teach English, then you would also take Encyclopedia and [?]. You will have about eighteen hours or twenty-four periods a week.

Do not decline the call; we need you, we want you. The reference to “German-English Professor” is a minor matter which I thought you ought to know. After you take up the work, you will recognize the fact that the Canadian Church depends on you & me to make the institution a success. The reactionaries have spent their power for injury.

Praying God may lead you to accept, I remain, with best wishes to all, 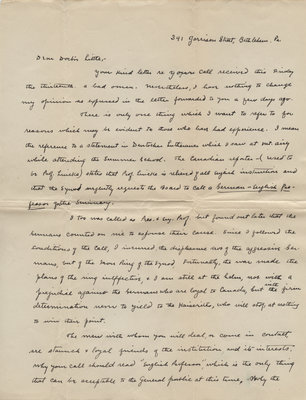