Creators
Knubel, Frederick H., Correspondent
Little, C. H.
, Recipient
Media Type
Text
Item Type
Correspondence
Description
Typewritten letter to Carroll Herman Little from F. H. Knubel, President of the United Lutheran Church in America. The letter is in response to letter from Little on behalf of the Canada Synod. It is signed by F. H. Knubel.
Notes
Carroll Herman Little (1872-1958) was a Lutheran pastor, and a professor and administrator at the Evangelical Lutheran Seminary of Canada (now Waterloo Lutheran Seminary) in Waterloo, Ontario. 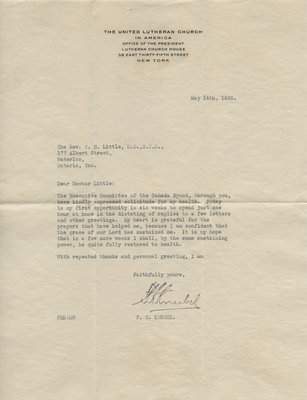