Your kind letter of recent date was received and read with interest and pleasure. Since we have undertaken the publication of a Church paper, of which I was made Editor, my time for reading and study has been materially diminished. In consequence I have not been able to accomplish much since I wrote you last. Still I have read a couple books. One of these was an old book by Bishop White of Pa., 1816, on the Calvinistic-Arurinian controversies. It was a long winded argument against Calvinism. I read one volume as patiently as I could and found some good things in it, but I was so disgusted with its general superficiality and the Pelagianism that I haven’t had the courage to tackle the second volume or to read his other book on the Anglican Catechism and doctrines which I have. The profound epistle to the Romans he reduces to a mere controversy as to whether the Gentiles should be admitted into the membership and privileges of the visible Church without submitting to circumcision and other Jewish rites or not. According to him, there is no such thing as election or predestination as pertaining to individuals, but only an election or predestination of nations or communities, and that not to salvation but only to certain privileges and opportunities, wherein the individual among the elected group must work out his own salvation. The best part of the book was the chapter on the universality of redemption, though even here some exceptions as to the proof brought forward might be taken. I have also ready one volume and am reading the second of Phillip Brooke’ Sermons. He is quite broad-church in some respects and is not a stickler for purity of doctrine, but his sermons are clear in thought and very devotional in spirit showing the heart of a man glowing with love to God and fellow man. As a Lutheran I was struck with the almost entire absence of Scriptural

quotations in his sermons. After the text is stated there is rarely another portion of Scripture to be found in the entire sermon and the word does not seem to be given the prominence that should be assigned to it as a means of grace. But for all that his sermons are helpful and inspiring.

As to the subject of Millennialism, it would not be becoming in me to argue it with you. Personally I was taught to believe long before I ever saw the Seminary in Phila that Chiliasm in every shape and form was condemned by Art. XVII of the Augsburg Confession, and this was one of the “Four Points” adopted many years ago by the Tennessee Synod by which it was distinguished from the rather loose Lutheranism of the Synods surrounding it. The action was known as “The Summit Rule” from its having occurred at the Convention of Synod held in Summit. SC. I just mention this to show you that my views on the subject were not changed or in any way modified by the teaching at Mt. Airy. I have read arguments on both sides of the subject – on the millennial side, however mostly by non-Lutheran authors. But I read Seiss’s “Last Times”, which I have no doubt you will agree is speculative and extravagant. Whatever my views may be, I always endeavour to read with a mind open to the conviction of the truth, and I would be glad to read your Biblical Theology and Commentary on Revelation or anything else that comes from your pen and hope to have the pleasure of doing so as soon as I am able to get some of these books. I don’t pin my faith to any of the dogmaticians, old or new, being fully aware that they are neither popes nor infallible apostles, but if I had to choose between Gerhardt or Cheurnitz and almost any of the modern German Theologians of the Conservative school, I do not hesitate to day that I would follow the former. I have almost finished the books worth reading in m library, outside of Commentaries, but am not in a position just now to invest to any considerable extent in new books. I wish I had some little books like MacClean on the Creeds, to carry around with me. That was one of the finest and most helpful little books I have read. With kindest regards to you and best wishes in every way, I am 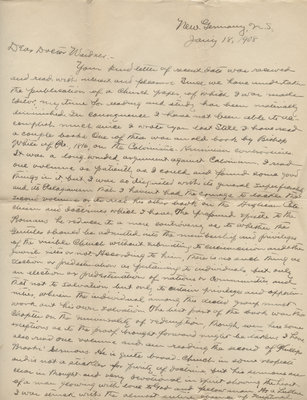