Creators
Cornelia Lossing Tilden, Correspondent
Augusta M. Marshall
, Recipient
Media Type
Text
Item Type
Correspondence
Description
Handwritten letter from Cornelia Lossing Tilden to her aunt, Augusta M. Marshall, on September 28, 1879. Tilden discusses the medical incompetence trial of her sister, Emily Stowe, in Toronto, Ontario. Includes stamped envelope.
Notes
Emily Howard Jennings Stowe (1831-1903) was a teacher and principal, a medical doctor, and a suffragette. Educated at home, Stowe became a teacher in 1846 and graduated from the Provincial Normal School in Toronto, Canada West in 1854. In 1865 Stowe applied to study medicine at the University of Toronto, but was denied entry because she was a woman. Unable to pursue her education in Canada, she attended the New York Medical College for Women. After graduating in 1867, Stowe returned to Toronto to practice medicine without a license. In 1870 was she allowed to attend the University of Toronto and was granted a medical license in 1880. In 1877 Emily Stowe organized Canada's first suffrage organization, initially called the Toronto Women's Literary Club, which later became the Toronto Women's Suffrage Club.

Ann Augusta Stowe-Gullen (1857-1943), daughter of Emily Howard Jennings Stowe, was a medical doctor, a lecturer and a suffragette. Stowe-Gullen was educated at the Toronto School of Medicine, and received her MD from the Faculty of Medicine at Victoria University. She was the first woman to graduate from a Canadian medical school. She was a founding member of Women's College Hospital in Toronto. Stowe-Gullen was a member of the Ontario College of Physicians and Surgeons, the Ontario Social Service Council, the Senate of the University of Toronto, the Toronto Board of Education, the University Women's Club, the Women's Art Association, the Women's Board at Toronto Western Hospital, and the Women's Canadian Club. She was active in the suffrage, temperance and other social movements. She was among the founders of the National Council of Women in 1893, President of the Canadian Suffrage Association, Vice-President of the National Council of Women, and she succeeded her mother as President of the Dominion Women's Enfranchisement Association in 1903. In 1935 she was awarded the Order of the British Empire.
Date of Original
Sept. 28, 1879
Dimensions
Width: 20.5 cm
Height: 29.5 cm

I cannot reply to thy more than interesting favor of the 9th [?], which reached me within due course of postal communication – Since that time Emily has been here for a few days and I first returned from Toronto last evening. I visited that city to sit and sustain Emily during her trial of persecution

It is terrible to see how vile some men’s are at heart. Of course you are familiar through the press with the prosecuting side which failed to find a case after continuing it nearly two days—It is far more complimentary to Emily to have it dismissed before the defence or coming for the jury—but it would have been far more satisfactory to have had her defence published—for she had all of her Peers in the medical profession and they would have rebutted the evidence of those noodles” in the profession that was heard for the crown—They tried long & hard to make a case—Further the crown attorney was contemptable – But the old scotch judge saw through them and would have ended it the first day only for Dr. Bull’s testimony – Every one says it has not lost a friend for Emily and made hosts of new ones – I remained two days after and it was one constant reception, the door bell ringing every minute, and several letters

The Ladies wish to give Emily a reception but she declines

Thy letter was very beautifully written and the sentiment fine. I feel sorry that I am unable to reply properly to it – but this matter is so strongly fixed uppermost upon my mind and pressed for time, having to write Mother Ellie Emily, Howard Duncan and [?] today, my hand is more than tired. I prepared for moving tomorrow and next day, and found a great number of letters last evening upon my return

Therefore thoult pardon this hasty scribble , [?] that it might be prolonged too long if I waited until after moving and settling & I only move on the same block two doors - with much & sincere love [?] [?] [?] thy affectionate niece C Lossing Tilden

P.S. When I see thy last I could not help thinking how much more quiet a mind was in the house then Emily’s not withstanding the surroundings. 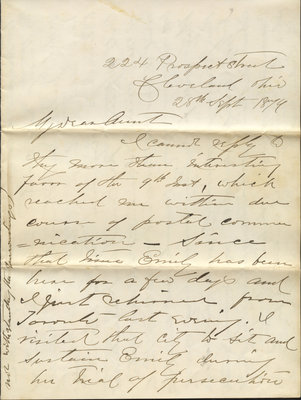