Media Type
Text
Item Type
Business cards
Description
Change of address card announcing that Dr. Emily H. Stowe has moved from 119 Church Street to 463 Spadina Avenue in Toronto, Ontario. Includes telephone number.
Notes
Emily Howard Jennings Stowe (1831-1903) was a teacher and principal, a medical doctor, and a suffragette. Educated at home, Stowe became a teacher in 1846 and graduated from the Provincial Normal School in Toronto, Canada West in 1854. In 1865 Stowe applied to study medicine at the University of Toronto, but was denied entry because she was a woman. Unable to pursue her education in Canada, she attended the New York Medical College for Women. After graduating in 1867, Stowe returned to Toronto to practice medicine without a license. In 1870 was she allowed to attend the University of Toronto and was granted a medical license in 1880. In 1877 Emily Stowe organized Canada's first suffrage organization, initially called the Toronto Women's Literary Club, which later became the Toronto Women's Suffrage Club.

Ann Augusta Stowe-Gullen (1857-1943), daughter of Emily Howard Jennings Stowe, was a medical doctor, a lecturer and a suffragette. Stowe-Gullen was educated at the Toronto School of Medicine, and received her MD from the Faculty of Medicine at Victoria University. She was the first woman to graduate from a Canadian medical school. She was a founding member of Women's College Hospital in Toronto. Stowe-Gullen was a member of the Ontario College of Physicians and Surgeons, the Ontario Social Service Council, the Senate of the University of Toronto, the Toronto Board of Education, the University Women's Club, the Women's Art Association, the Women's Board at Toronto Western Hospital, and the Women's Canadian Club. She was active in the suffrage, temperance and other social movements. She was among the founders of the National Council of Women in 1893, President of the Canadian Suffrage Association, Vice-President of the National Council of Women, and she succeeded her mother as President of the Dominion Women's Enfranchisement Association in 1903. In 1935 she was awarded the Order of the British Empire.
Date of Original
Between 1880 and 1903
Dimensions
Width: 11.3 cm
Height: 8.9 cm 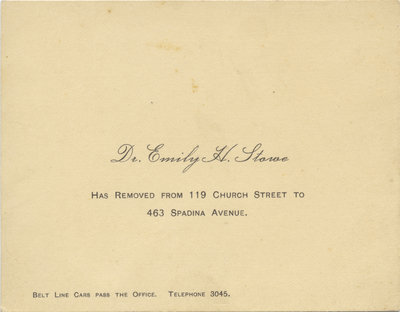