Creator
Jack Markow & Company, Photographer
Media Type
Image
Item Type
Photographs
Description
Black and white photograph of the Evangelical Lutheran Church of the Redeemer choir singing during a service. They are standing on the right side of the altar. The men and women are dressed in robes and are holding sheet music. The altar is decorated with potted flowers.
Notes
The Evangelical Lutheran Church of the Redeemer in Montreal, Quebec was established on January 15, 1905. From 1905 to 1910 the congregation met in a house located on Mountain Street in Montreal, Quebec. In the spring of 1910, the church moved to a new location on Essex Street (now Dorchester Boulevard). In spring 1912 congregation purchased the former Bethlehem Congregational Church located on Clarke Avenue. In 1962 the old church building was demolished and a new church was built. In 1996 the congregation merged with Christ in Dollard-des-Ormeaux and became Christ the Redeemer Lutheran Church in Dollard-des-Ormeaux, Quebec, part of the Eastern Synod of the Evangelical Lutheran Church in Canada. 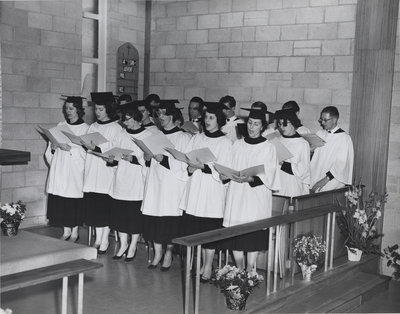