The monthly meeting of the Women's Missionary Society was held this evening at the home of Mrs. Merkel with an attendance of nine.

The minutes were then read and adopted.

Correspondence was read from Unionville asking the society to pay towards slavs.

Moved by Mrs. Kleindinst sec. by Miss Volkman that we pay $5.00 towards slavs.

The roll was then called.

Topic for the day: In Lumber Camp and Mines. The following

"The Breakers Boy" by

"Musings of a Hungarian Baby" by Miss Schultz and "The story of a red dragon" by Miss Martin.

A vote of thanks was tendered Mrs. Merkel for the use of her home.

Miss Schultz invited the society to her home for the next meeting. 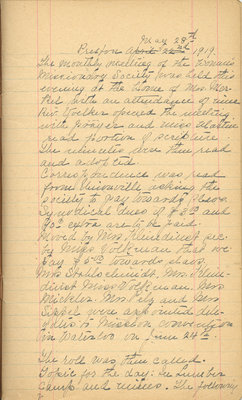