The monthly meeting of the Women's Missionary Society was held this afternoon at the home of Miss Janet Stahlschmidt and 25 ladies were present.

The President opened the meeting with prayer. The minutes were read and adopted. The roll was then called.

Five ladies were then proposed and accepted as

The Society decided to hold a social on Friday evening, May 1st, and the Secretary was instructed to send invitations to the Confirmation classes of 1913 and 1914, but it was to be announced on Sunday, that the whole congregation is to attend.

Five ladies volunteered to act as a committee to see about the refreshments and programme. The committee was composed of Miss Roos, Mrs. Gheurer, Mrs. Sohrt, Mrs. Kanmacher and Miss Ewald.

The Society decided to meet in the basement in May if no home is offered in the meantime. Mrs. Merkel offered her home for the June meeting.

A motion was made and carried that the

ladies of the Society attend Sunday School the first Sunday in May for the unveiling of the picture of Dr. Muhlenberg and also to distribute pamphlets.

Mrs. Gheurer handed in the sum of $2.15 which the Confirmation class donated, it being the sum they had left in their treasury.

The Secretary was instructed to write a letter of thanks to the class, addressed to Miss Florence Gheurer, to show our appreciation.

Mrs. Stahlschmidt and her daughter were tendered a hearty vote of thanks for the use of their home. 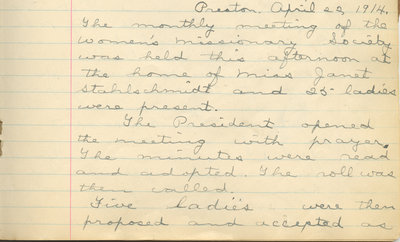