The monthly meeting of the Women's Missionary Society was held this afternoon at the home of Mrs. Sohrt, and twenty one ladies were present.

The President opened the meeting with prayer and Mrs. Wirsching read a portion of Scripture.

The minutes of the last meeting were read and adopted, and the roll was called.

Several of the members read passages from the Bible, bearing on the subject of the day.

A motion was carried, that the Secretary write a letter of thanks to Mr. Adam Roos for the use of a Victrola which helped to make the concert a success.

A motion was carried that all the present officers be re-elected for the year.

then read by Mrs. Merkel and Mrs. Wirsching.

An invitation from Miss Ewald to meet at her home in March, was gladly accepted.

A hearty vote of thanks was tendered Mrs. Sohrt for the use of her home.

Three ladies volunteered to provide refreshments for the first meeting of the Sewing Circle.

There being no other business the meeting was closed with prayer. 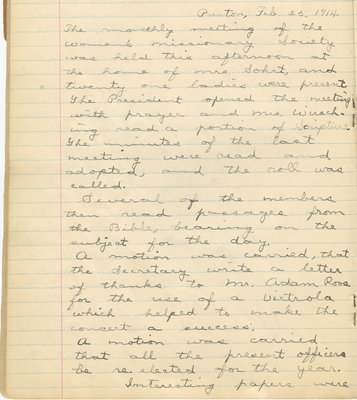