The monthly meeting of the Women's Missionary Society was held this afternoon at the home of Miss Stahlschmidt, 27 ladies were present, among them two visitors from Waterloo - Mrs. Conrad and Mrs. Froelich.

The meeting was opened with Responsive reading and prayer by Mrs. R. Schultz.

The minutes of the last meeting were read and adopted and the roll was called.

Mrs. Ed. Blieler, Mrs. Emil Brown, Miss Koehler and Mrs. Murray were proposed as new members of the Society. On motion by

Mrs. Schoenau, seconded by Miss Roos, then carroed, the members were accepted.

A letter was read from the Pastor, apologizing for not being able to be present at the meeting, and thanking the Society for the kindness shown him and the dear one who has been called to a better home.

Letters were read from Rev. Behrens, Berlin, Rev. Bockelmann, Waterloo, and the Secretary of the Ladies' Aid and Missionary Society of Galt, accepting our invitation to co-operate with us, in meeting one evening in the Home Mission Week.

On motion by Miss Halberstadlt, seconded by Mrs. Wirsching, then carried, Wed. Nov. 19, was set as the date for the meeting, and the Secretary was instructed to notify the different Societies who had been invited.

The President then read a letter from Mrs. Sandford had sent with Mrs. Lucas' Memorial certificate.

The ladies, who were out collecting for the Seminary, then handed in the money and it was found that $78.45 was the total amount.

It was moved by Miss Martin seconded by Miss Ewald, then carried, that the President write to the newly organized Women's Missionary Society in Waterloo, and send greetings from this Society.

An invitation from Miss Martin to meet at her home in November was accepted.

On motion by Miss Martin, seconded by Miss Roos, then carried, a hearty vote of thanks was tendered Miss Stahlschmidt for the use of her home.

The meeting was then closed with a prayer by Mrs. Stahlschmidt. 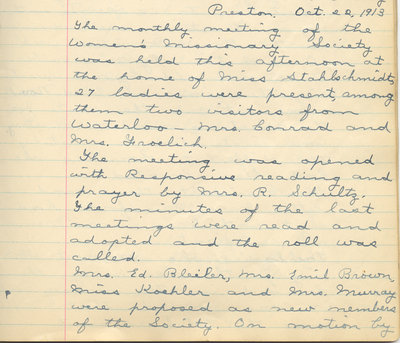