The monthly meeting of the Women's Missionary Society was held this afternoon at the home of Mrs. Schoenau and nineteen members were present.

The meeting was opened with prayer.

The minutes of the last meeting were read and adopted and the roll was called.

A motion was made by Miss Roos, seconded by Miss Ewald, then carried, that Mrs. Lucas be made a members in memoriam.

A motion was made by Mrs. Schoenau, seconded by Mrs. Heise, then carried, that in future, Three Dollars is to be spent for floral tribute of sympathy at the death of a member.

The members decided to meet once a month to sew for a sale of work for the Seminary.

A motion was made by Miss E. Stahlschmidt, seconded by Mrs. Werlich that the Secretary write to the Societies of the Lutheran Churches in the neighbouring towns to see if they will co-operate with us in meeting one evening in the Home Mission week. The motion was carried.

A motion was made by Mrs. Merkle, seconded by Mrs. Heise, then carried, that Mrs. Schoenau be tendered a hearty vote of thanks for her hospitality.

An invitation from Miss E. Stahlschmidt, to meet at her home in October was gladly accepted. 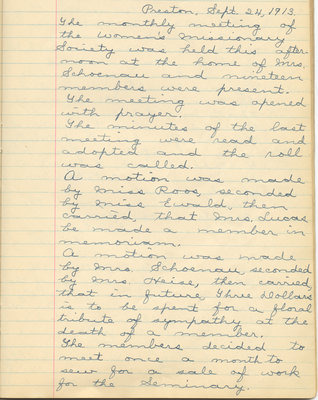