Creators
Martin, L., Secretary
Women's Missionary Society of St. Peter's Evangelical Lutheran Church
, Organizer of meeting
Media Type
Text
Item Type
Documents
Description
Handwritten minutes of the annual meeting of the Women's Missionary Society of St. Peter's Lutheran Church in Cambridge, Ontario, held on February 23, 1913. At the meeting the Society members decided to donate $10.00 to the Bethany Orphans' Home in Nova Scotia, and $5.00 to mission work in Japan. They also decided to hold a talent tea in support of the Evangelical Lutheran Seminary of Canada, and to sew quilts for the Seminarians.
Notes
Minutes bound in a 32.5 cm x 20.5 cm brown, soft cover notebook. The word "Minute." is printed on the cover, and "Ladies Missionary Society, Sec. Report, Feb. 1912 - Jan. 1915" is typed on white label.

The annual meeting of the Women's Missionary Society was held this afternoon in the church. The meeting was opened with a hymn, then the Pastor led in prayer and read a portion of Scripture.

A very earnest and interesting talk on Missions was then given by Rev. Lucas. The minutes of the last meeting held in January were read and adopted. Four members were added to the Society: Mesdames Ploethner, Kanmacher and Levandusky and Miss Gertrude Stahlschmidt.

Reports were then read by the Secretary, Treasurer, Chairman of the Literature Committee, and by Miss Roos who sells picture postcards known as the Brown postal cards.

All the reports were very gratifying and the Pastor thanked the officers for their good work during the year.

A motion was made by Mrs. Theurer seconded by Miss Helwig, then carried that a hearty vote of

thanks be tendered the officers for their work during the past year.

The Pastor then asked to have the various reports forwarded to Mrs. Charles L. Fry, editor of the "Lutheran Mission Worker."

The President then read Article IV of the Constitution on Officers and how to be elected.

Mrs. Merkel made a motion which Miss Roos seconded that all the officers be re-elected and the motion was carried.

The President received word from the English Canada Synod of the General Council that the dues are Three Dollars and this Society will be entitled to send five delegates to the annual convention. It was decided that a formal application be made.

A motion was made by Mrs. Kleindienst, seconded by Mrs. Heise, then carried, that a hearty vote of thanks be tendered Rev. Lucas for all the help he has given the Society during the past year.

A vote of thanks moved by Mrs. Kleindienst, seconded by Mrs. Grobe, then carried was tendered those who have been paying the postage during the past year.

A motion was made by Mrs. Kleindienst, seconded by Mrs. Schlueter than carried, that the Society donate the sum of Ten Dollars to the Orphanage in Bridgewater, N.S. and the Sum of Five Dollars to mission work in Japan.

It was then decided to hold a talent tea in aid of the Seminary in Waterloo. A motion was made by Mrs. Lucas, seconded by Miss E. Stahlschmidt then carried that the tea be held from 4 p.m. till 9 p.m. the first Thursday after Easter.

It was decided to sew quilts for the Seminary and the members were requested to bring patches. Mrs. Grobe then invited the Society to hold its next regular meeting at her home.

There being no other

business the meeting was closed with prayer. 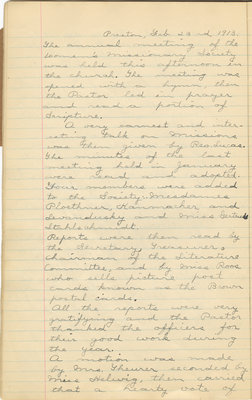