The monthly meeting of the Women's Missionary Society was held this afternoon at the home of Mrs. Sohrt and sixteen members were present.

Mrs. Stahlschmidt opened the meeting by reading a portion of Scripture then leading in Prayer.

The minutes of the last meeting were read and adopted. The roll was called. A motion was made by Miss Roos, seconded by Mrs. Lucas then carried, that the Society meet every Friday afternoon during Lent, at the home of Mrs. Stahlschmidt to sew for the hospital in India. Mrs. Heise and Mrs. Schoenau were appointed to buy the material.

A motion was made by Miss E. Stahlschmidt, seconded by Miss Helwig then carried, that the President write

to the English Canada Synod of the General Council for its rules and regulations and ask if this Society may be admitted.

It was decided to invite Mr. Kuder of India, who is returning on furlough, to speak in Preston.

A motion was made by Mrs. Schoenau seconded by Mrs. Grobe, then carried, that the next meeting, (it being the annual one) be held in the church, on the fourth Sunday in February. Mrs. Stahlschmidt then read an instructive paper - "11 facts on Japan."

Miss Clara Stahlschmidt then gave a very interesting talk on Japan, as she saw it.

A motion was made by Miss L. Martin, seconded by Miss E. Stahlschmidt, and carried, that the sum of Five Dollars be

donated towards the Mission work in Japan.

The Secretary then read a letter from Mrs. P. Bernhardt thanking the members for the letter of sympathy which she had received from the Society after her bereavement in the death of her sister.

A letter was read from C.H. Little, the Housefather of the Orphans' Home at Bridgewater, N.S., thanking the Society for its contribution of Five Dollars.

A letter was read from Mr. and Mrs. Palmer thanking the members for their donation of clothing.

After a hearty vote of thanks had been tendered Mrs. Sohrt for her hospitality Mrs. Grobe closed the meeting by leading in Prayer. 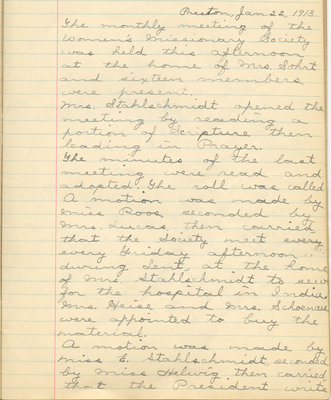