The monthly meeting of the Women's Missionary Society was held this afternoon at the home of Mrs. Charles Clare, and eleven members were present.

The President opened the meeting by reading a portion of Scripture and Mrs. Schoenau led in prayer.

The minutes of the last meeting were read and adopted.

Studies" and for the postage. Three new members were added to the Society - Mrs. George Clare, Misses Georgina and Minnie Clare.

Mrs. Stahlschmidt read two very interesting letters direct from the field, one from Miss Schade, the other from Miss Munroe.

Mrs. Sohrt then read a letter from the Field Secretary of the Porto Rico Mission Board.

Papers were read by Mrs. Merkel and Mrs. Stahlschmidt.

After the roll call hearty vote of thanks was tendered Mrs. Clare for her hospitality.

A motion was made by Mrs. Clare seconded by Mrs. P. Bernhardt that the Society send Five Dollars to Porto Rico, the motion was carried.

The Society then accepted an invitation from Mrs.

Sohrt to meet at her home in January, after which the meeting was closed with Prayer. 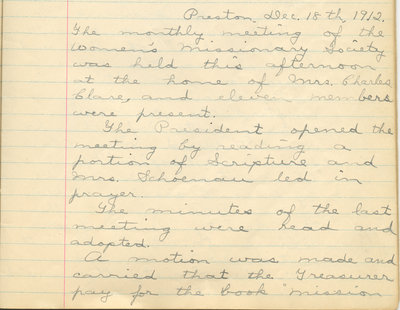