The monthly meeting of the Women's Missionary Society was held this afternoon at the Parsonage. Rev. Lucas opened the meeting with prayer and read a portion of Scripture.

The minutes of the last meeting were read and adopted. The roll was then called.

A motion was made by Mrs. Merkel

seconded by Mrs. Schlueter, that a hearty vote of thanks be tendered to Mrs. Wirsching for her kindness in giving a tea in aid of the Society was carried. Mrs. Wirsching handed in 75 cents thus making the total receipts of her tea $14.30.

A motion was made and carried that this Society will send Thirty Dollars a year to India, to educate either two female teachers or one male. The Secretary was instructed to forward the money to the General Secretary of the Board of Foreign Missions, asking the Board to use the money as they think best.

A motion made by Mrs. Wirsching, seconded by Miss Ewald, that the Society donate Five Dollars to the Lutheran Seminary in Waterloo, was carried.

Two quilts were also donated, one made by Mrs. H. Meyer, the other by Miss Ewald. Miss. M Roos was asked to send for Indian view post-cards, which are to be sold in aid of missions. It was decided to serve

coffee and cake at the anniversary service on Tuesday evening, Oct. 29. The Pastor then gave a very interesting and instructive address on "Women and Missions."

A motion made my Mrs. Clare, seconded by Miss L. Martin, that a hearty vote of thanks be tendered Rev. Lucas for his able address, was carried.

A motion was then made by Mrs. Merkel, seconded by Miss Roos that a hearty vote of thanks be tendered Mrs. Lucas for her hospitality, after which the meeting was closed with prayer by the Pastor. 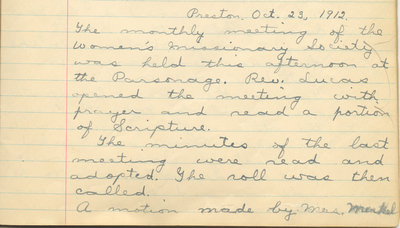