The monthly meeting of the Women's Missionary Society was held this afternoon at the home of Mrs. Helwig. The President opened the meeting with prayer. The minutes of the last meeting were read and adopted. The roll was then called.

The pamphlet containing an article from "The Lutheran Mission Worker" was then discussed.

The subject "How can we make our meetings more instructive" was then taken up.

It was decided to postpone the talk on Home Mission work until the next meeting when the members would have copies of the "Mission Worker," which comes out the first week in Sept. and is devoted entirely to Home Mission Work.

Miss Helwig was proposed and accepted as a member of the Society.

A hearty vote of thanks was tendered Mrs. Helwig for her hospitality.

An invitation from Mrs. Driever to meet at her home in Sept. was gladly

Mrs. Wirsching then kindly offered to give a tea on Thursday evening, Sept. 5th in aid of the Missionary Society, and the meeting was closed with prayer. 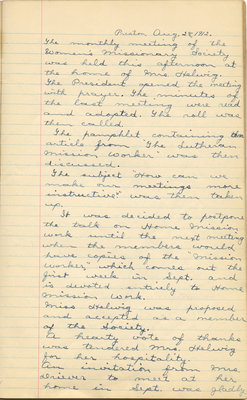