The monthly meeting of the Women's Missionary Society was held this afternoon at the home of Mrs. Wirsching. The President opened the meeting with prayer. The minutes of the last meeting were read and adopted and the roll was called.

The President then gave a very interesting reading.

It was decided to have a general discussion on Home Mission at the next meeting.

A motion was made and carried that 100 pamphlets "Will you form a class" be ordered.

An invitation to meet at the home of Mrs. Helwig the next meeting was accepted.

A hearty vote of thanks was tendered Mrs. Wirsching for her hospitality. 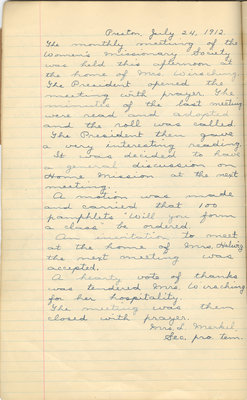