The monthly meeting of the Women's Missionary Society was held this afternoon at the home of Mrs. Stahlschmidt. Miss L. Martin opened the meeting by leading in prayer.

The minutes of the last meeting were then read and adopted, and the roll was called.

Owing to another engagement it was impossible for Mrs. Wirsching to have the meeting at her home this month, but she kindly asked the Society to meet there in July.

The President then gave a most interesting and instructive talk on India, and was tendered a hearty vote of thanks.

The meeting was then closed with Prayer. 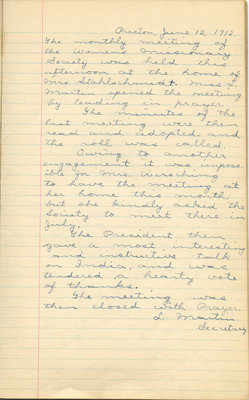