A meeting of the Women's Missionary Society was held this afternoon at the home of Miss L. Martin. Rev. Lucas opened the meeting with prayer, then reading a portion of Scripture.

The minutes of the last meeting were read and adopted.

The roll was then called. The President again read over the Constitution that has been recommended for Women's Missionary Societies in the Lutheran General Council. The different articles were discussed and a few changes made. The following Constitution was then adopted:

This Society shall be called The Women's Missionary Society

Its object shall be to zealously aid the Women's Missionary Society of the Synod and of the General Council in prosecuting the great work at home and abroad by developing the missionary activity of its own members, and of the congregation to which it belongs. This shall be done by discussions at its meetings, by circulating missionary literature, by seeking out devoted women to become missionaries or deaconesses, and if possible by annually conducting an every-member canvass of the congregation for an offering for missions.

Any women may become a member of this Society by signing its Constitution, contributing systematically to its work, and praying for the advancement of its objects.

The officers shall be a President, Vice-President, Secretary, Treasurer and Literature Chairman, who, together shall constitute the Executive

Committee, to fill any vacancies and devise plans for furthering the Society's efficiency. They shall be chosen from the members of this Society, shall be communicant members of this congregation, and shall hold office for one year. Any member holding office may be re-elected.

All funds raised by this Society shall be devoted to the cause of missions. Dues or freewill offerings shall be taken, as the Society shall from time to time decide. The payment of ten dollars at one time shall constitute any person a life member of the General Council Society, and his or her name shall be so recorded on the books of this local Society. Such life-membership is open also to the children of our households.

Regular meetings shall be held monthly, and The Monthly Topics published by the General Council Society shall be used.

Special meetings may be called by the President, at the written request of three members. An anniversary meeting shall be held each year, on which occasion the programme shall be designed to stir up greater public interest in our Lutheran Missionary enterprises. At this meeting the annual reports shall be presented, and an address shall be delivered. All meetings of the Society shall be open to the pastor, and no action shall be taken contrary to the advice of the pastor and Church Council.

Amendments to this Constitution may be made at any regular meeting of the Society, by a vote of two-thirds of the members present, providing that notice of such proposed amendment shall have been presented in writing at the preceding regular meeting.

Article I. The President.

The President shall preside at all meetings, appoint all committees not other

wise provided for, and have general oversight of the work. In case of her absence, the Vice-President shall act.

The Treasurer shall take charge of all funds of the Society, keep account of all receipts and payments in a book provided for the purpose, and at once remit monies to the causes for which they were contributed. She shall have a voucher, signed by the President or Secretary, for every sum paid out.

subscriptions for the Lutheran Mission Worker, and keep a correct list of all subscribers in the congregation, notifying them about the time for renewals. She shall also bring all other official publications of the General Council Society to the attention of the members.

Amendments to these By-Laws may be made by a majority vote at any regular meeting of the Society if a motion to amend shall have been made at the preceding meeting.

It was decided to have general discussions on Indian missions at the next meetings.

An invitation to meet at the home of Mrs. Wirsching for the next meeting was accepted. On account of a Kirmess celebration to be held the last week in June, it was thought advisable to hold the next meeting the second Wednesday in June. 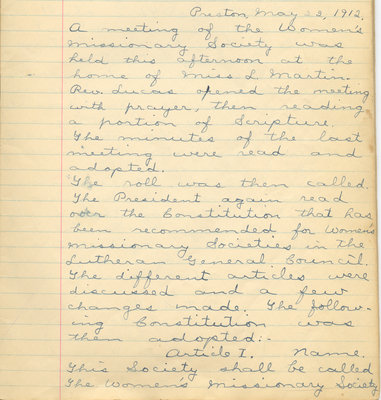