A meeting of the Women's Missionary Society was held this afternoon at the home of Mrs. Stahlschmidt.

The President opened the meeting, then read over the Constitution that has been recommended for Women's Missionary Societies in the Lutheran General Council. The different articles were discussed.

The Secretary read a card from Rev. E. Neudorffer, Neustadt, acknowledging the receipt of the bale, and thanking the Society heartily for the donation.

The roll was then called. It was decided to meet in future on the 4th

Wednesday in the month. An invitation was accepted from Miss L.Martin to meet at her home for the next meeting.

After spending a pleasant social hour the meeting adjourned. 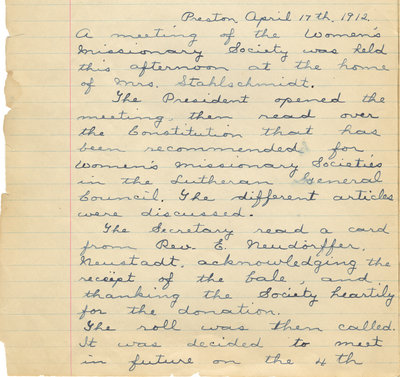