Creators
Carroll Herman Little, Correspondent
Candace Little
, Recipient
Media Type
Text
Item Type
Correspondence
Description
Partial handwritten letter from Carroll Herman Little to his mother, Candace Little, in December 1916. Little describes family life with his wife Bonnie and their children, and his work as a Lutheran pastor in Morrisburg, Ontario. Little discusses the war, and the appointment of "pro-German" Rev. Larmartine in Montreal, Quebec, and the leadership of Dr. Laury at the Evangelical Lutheran Seminary of Canada.
Notes
Carroll Herman Little (1872-1958) was a Lutheran pastor, and a professor and administrator at the Evangelical Lutheran Seminary of Canada (later Waterloo Lutheran Seminary; now Martin Luther University College) in Waterloo, Ontario.

time as I told her after she had bought her ticket and as she found out in Montreal. I got a girl by going after her on Monday of this week. But I don't know how long she will stay as she is rather homesick, and besides she is so ignorant and uncouth that Bonnie is not inclined to keep her any way. Bonnie thinks now that she will send the washing out, hire someone to come in and keep the children on Sunday mornings and try to get along without a girl. I don't know yet, however, what arrangements we will make.

Carolous and Herman both headed the honor roll in their classes in November as you will see from the lists Carolus has made out in his letter which I am enclosing. The mumps are around here now and Ryerson Casselman has them. As the boys were with him about the time he broke out with them they are liable to take them almost anytime. If they do, that will put them back somewhat in their school work as they keep them out three weeks after they are over them. The whooping cough also is around in a few places. If they should get that it would be worse still. One of our neighbor women

maintains that our children had the whooping cough last winter, but I don't think so, though they had colds that hung on for quite a while. I am waiting to hear from Herbert on the last proposition I made him in re of supplying Ottawa. I received a letter from Dr. Kunzmann in which he said any arrangements I could make with Herbert would be satisfactory to him. So I hope he will come to Ottawa at Easter and stay for the summer, which I think would be profitable both for him and the Ottawa Mission. I am afraid our Seminary is going to be “up against it” in the near future. Our Synod is too small to maintain it by itself and Dr. Laury has so antagonized the Germans of the Canada Synode that they are lukewarm if not actually hostile to it. I received a cared to-night from Dr. Hoffman, Pres. of the Canada Synod, on which he says, “Our Seminary cause is actually suffering on account of the unwise and uncharitable attitude of some” and adds, “I have been looking and working for a union of the Canadian Lutheran forces, at least those of the Gen. Council, but am afraid a deep chasm has been created”. The trouble with Dr. Laury, who is quite

a capable man is that he allows his anti-German prejudices to get the better of him, and never misses an opportunity of pitching into the Germans. If he continues there longer than this year the Germans will no doubt pull out and we will have a white elephant on our hands. I am sorry that he is not more tactful and judicious, but he leaves the impression especially among the German brethren that he is more interested in building up Canadian patriotism than in serving the Lutheran Church and that he would rather fight the Germans than the devil. It wouldn’t be so bad if the Germans were a small body as we are and we a large body as they are. But as they are paying three or four times as much toward the Seminary as we are, it is a very unprofitable business to go out of one’s way to alienate them. Dr. Kunzmann wrote me that Rev. Lamartine was coming to Montreal in spite of any protest Pastor Maurer might make and that he (Dr. K) was confident that Rev. L would prove satisfactory and would not exhibit any anti-Ally tendencies. For my part I am not disposed to interfere. Well, I must close and not take up too much paper for one letter. With love I am 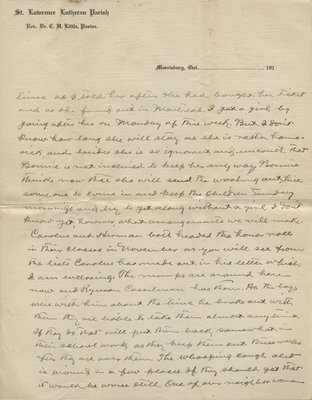