In accordance with your recommendation I secured the two books, Schenck’s Modern Practical Theology and McClear on the Creeds. I have read the first very carefully and also part of the second. I found the latter as far as I have read it the finest exposition of the creeds I have ever seen. I don’t find his exposition of the term “Communion of Saints” altogether satisfactory and as was to have been expected he is off on the descennus, but on the whole the book is admirable and is the fullest and most compact for a little thing that I have ever come across. I intend to read and reread it. Schenck’s

book is also very suggestive and multurn in parvo. I want to carry out as soon as possible his excellent suggestions in reference to the reading of the English Bible. Some of his remarks, however, about the different books strike me as being a little fanciful. I do not agree with him as to the date of the Revelation or the authorship of the 90th Psalm. I might make a few other criticisms of this portion of the book, but must pass on. The homiletical portion of the book contains many valuable hints. I agree with his opinion that the extempore method of sermonising is the most effective. In my own experience I have found it at time extremely satisfactory and at other times almost the reverse. I don’t know whether I would have the courage to follow it exclusively or not. I also find correct in my experience his contention that the written sermon

is essentially different from the oral sermon. If, for instance, I write a sermon out in full and then attempt to preach it without manuscript, it is next to impossible to keep from thinking of the words in which it was written. There are good points in his poimenics and archagics, but his views on revivals are not strictly orthodox from our point of view and much of his archagics pertains only to his denomination. He doesn’t seem to know any calechtismus predigtum in the Lutheran church, or indeed to know much about the Lutheran Church at all. I was rather surprised to find that he had discovered it in his pedagogy and that in that happy discovery it met with his approval. It occurs , the only time in the book, in this sentence, “The Rom. Cath., Episcopal and Lutheran Churches wisely strive in their confirmation classes to bring the adolescent into Church relationship.”

His sociology is on the whole quite good, but he inclines a little too strongly here as elsewhere toward evolution, and in one place seems to imply that in the family poverty is a moral reason for restricting the number of births. But I can not now enter into more details in reference to the book. I have found it exceedingly interesting and quite helpful. I have just read another little book in translation, Krummacher’s “Elijah the Tishbite”, which I found quite inspiring. I have also bought at your suggestion last summer Zezachwitz’s Christenlebre and have read considerable in it. It is very full, logical and generally thoroughly sound and the way he clinches points with apt Scripture quotation is amazing. And what makes it a delight to read is the simple, easy German in which it is written. I can read it right

along almost the same as English. I have lately invested also in [?] “Means of Grace” and in [?] two books “Baptizeim” and the “Eucharist.” I haven't reay any of these yet but have learned through the “Baptizeim” and don’t find anything much new outside of historical data. In some respects he seems to overdo the thing. I have found greater help in Luther on the Sacraments, Henkel translation, than in anything modern or ancient I ever struck on these subjects. But it is getting late and I must close I will await and endeavour to follow any other counsel you may give me. I expect to concentrate my new Church at Newburn on the 6th Sunday. This will be the second Church I have consecrated during the year. I remember you daily in my prayers. God’s blessing and a merry Christmas to you 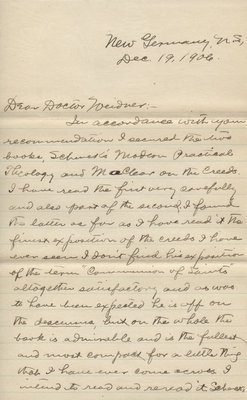