As I am rather unexpectedly home to-night I will utilize the opportunity to drop you a few lines once more. I was to preach in Hespeler again to-night but owing to the severe snow-storm we had to-day the street cars were not running and after waiting for a car to come along until it was too late I had to phone the people at Hespeler that I could not come. I was sorry to disappoint them and also sorry to miss the remuneration of seven dollars which would have come in very good to me at present, but it could not be helped. I tried to get a taxi to take me down to the car station at Kitchener but even they were not doing business on account of the storm, which was the wildest we have had this winter so far. Otherwise it is much more comfortable to be at home in a good warm house where one can sit with his coat peeled off. We had a rather cold week last week – good steady weather – until Friday afternoon when it began snowing and soon turned to rain. It rained hard all Friday night, all day Saturday and till midnight Saturday night when there was a sudden change of temperature and high wind and snow. This kept up all day to-day, though it has calmed down somewhat to-night and is no longer snowing. The heavy wind so drifted the snow that the cars have been running only intermittently all day. But with the snow everywhere and the windows all frosted up it certainly begins to look Christmasy. Carolus and Herman went down to Church to-night and have just now returned. Bonnie didn’t go to-night on account of the storm. I was down this morning and read the Liturgy. There were about 200 present, I judge, the smallest congregation I have ever seen in St. John’s at a morning service.

Yesterday Bonnie and I went down to Kitchener through the rain to purchase her Christmas presents for her people. In spite of the inclemency of the elements we got through with the job all right and at not too great an expense. To-day Bonnie has been pretty busy doing up her presents and getting them ready for mailing to-morrow. Father DeLong sent his usual contribution to our Christmas budget. He always sends the children $3 apiece and some for smokes for me. Nearly every year he has to send a little more. Last year it was $20. This year he sent $25. This is encouraging infant industries. However, if we had one more he could still send $25 and be within the $3 limit, and it would mean that I would get only $1 for smokes. So there is not much encouragement for a new addition unless we were certain of adding two at a time. He always sends Bonnie the Ladies’ Home Journal as her present. I think I will be able to keep the children's presents within the limit of the amount received this year, which is quite necessary on account of present financial stringency. If I could have preached at Hespeler to-night I would have had a little more to go on, but I think we have enough for happiness all around. I paid the last installment on my piano last week. I would have paid it before but was waiting on the circasian walnut seat to match the piano which had been promised by the Kitchener branch when I purchased the piano. For this reason I held $20 back and wrote the company that I wouldn’t pay it till I got the seat. They were not slow after I wrote them in sending it, though I had been after the agent in Kitchener in vain for the last two years for it. If I had paid up in full before receiving it I don’t imagine I would ever have gotten it.

night. They say they will each get a pound of candy apiece this year – a very generous portion, I think. The little ones are practicing for our Christmas tree at home. They are all going to say pieces and Arthur and Eileen have solos to sing. I bought a nice Christmas tree the other day for 50₵ and the children are looking forward to see it decorated. Marion was singing a piece the other morning and was somewhat out of tune which disgusted Arthur and he said “Aw, Marion, you sing so monotonous.” He likes to use big words and show off his knowledge. He gets along fine in everything except Arithmetic which is his bugaboo. He is a great mimic and can take off anybody to perfection. He attends German chapel in the Seminary so, he says, he will know German when he gets into the Seminary. Prof. Henkel has a peculiar way of reading and it would tickle you immensely to hear him take off the way Prof. Henkel reads the German. He already knows a good deal of the service by heart. He began reading the Bible through the other day and has read the first thirty chapters in Genesis within the last week. I think he must have read a half dozen or more chapters to-day. Herman made a good record on his examinations. He stood 5th in a class of 42. Carolus didn’t do so well but passed on every thing. He stands 20th I think, which is about the middle. I didn’t hear how Marion and Arthur averaged up, but I think Marion stood around 11th or 12th. Little Ruth is growing quite rapidly lately and is very tall for her age. She takes great interest in every thing, claps her hands when the children sing and laughs heartily over things which appear to her funny. She is the best little child you ever saw and is very pretty. I took Eileen down to the barber shop the other day and had her hair bobbed Dutch-fashion. She is so full-faced and fat that she looks like a good-natured picture. She rivals Arthur in singing. Dr. Hoffmann is going to Philadelphia this week to spend Christmas at his daughter’s. The Board will

meet on Tuesday of this week at which time we will probably have Pastor Bermon with us. I think he intends to get married between Christmas and New Year to his Port Colborne girl. I haven’t heard any thing lately of his leaving Port Colborne and hope he has made up his mind to stay there for awhile yet. Dr. Hoffmann told me this morning that the wind last night blew one of the small windows in his study open and the snow came in and destroyed his report to the Board and a number of examination papers he had made out for to-morrow and almost flooded the room. Well, my letter is getting beyond its proper length, but I wish to add my greetings for the holy Christmas season and to wish you one and all at home a very happy and blessed Christmas with all the pure joys this holy season brings. With love to you all from us all, I am 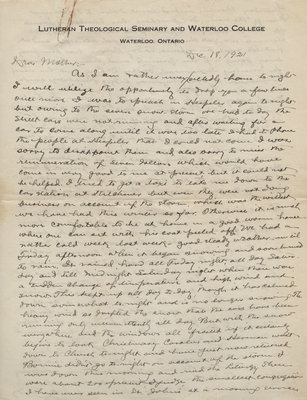